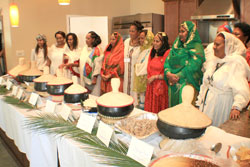 A symposium highlighting the history and struggle of Eritrean women was held in Oakland, USA, in connection with the 35th founding anniversary of the NUEW.

Asmara, 16 March 2015 – A symposium highlighting the history and struggle of Eritrean women was held in Oakland, USA, in connection with the 35th founding anniversary of the NUEW.

Seminars focusing on experience of Eritrean women fighters, exemplary role of Eritrean women in the liberation struggle, safeguarding the nation’s dignity, the nation-building process, origins of Eritrean women’s Union in North America, Eritrea’s enduring commitment to gender equality and empowerment, Eritrean youth building bridges in generational conflict and identities, among others, were organized on the occasion by nationals there and from the Homeland.

In a speech she delivered as a guest of honor, Ms. Tekha Tesfamichael, Chairperson of the NUEW, pointed out that Eritrean women have played pivotal role which goes beyond ensuring equality and that the Union is exerting vigorous effort to further strengthen itself.

In the course of the symposium, pictorial exhibition depicting Eritrean women’s achievements over the past 35 years,  a documentary film portraying the country’s correct image and natural resources, traditional culture, lifestyle of Eritrean ethnic groups, as well as cultural performance were featured.

Solidarity messages of representatives of a number of institutions and the Administration of Oakland city were also conveyed on the occasion.

Meanwhile, Eritrean women residing in Abu Dhabi, Switzerland, Norway and Atlanta have expressed readiness to enhance role in national development endeavors through higher organizational capacity and enhanced awareness. They made the pledge at respective commemorative events they conducted in connection with International Women’s Day.

Students called upon to raise awareness regarding law and crime prevention