Seminar conducted in Assab for students regarding law 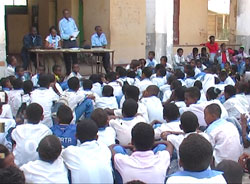 A seminar was conducted for students of Hamid Idris Awate Secondary School in Assab city regarding law.

Assab, 17 March 2015 – A seminar was conducted for students of Hamid Idris Awate Secondary School in Assab city regarding law.

Capt. Estifanos Kebede, and Corporal Gide Haile, Commander and head of crime prevention at the Police station of the city, respectively called on the students to sustain collaboration with members of the Police on the basis of higher awareness.

They underlined the vitality of abiding by traffic laws and thereby reduce of instances of accident. The students on their part expressed readiness to enhance cooperation with the Police Force and called for continuity of similar promotional activities.

Meanwhile, similar meetings were conducted for the inhabitants, students and members of the People’s Army in Afambo, Bel’ubey and Eddi, Central-Denkalia sub-zone.