Photo exhibition: Showcasing the beauty and diversity of Eritrea 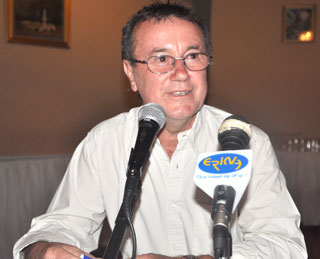 His name is Jose-Marie Bel, French by citizenship but spend much of his life touring around the Horn of Africa, North Africa and the Arab world.  He says he loves to live the lives of the people in the Maghreb where he spent most of his childhood. Mr. Marie moved to Morocco with his family at his early childhood and speaks classical Arabic.

In 1975 Mr. Marie came to Eritrea from Egypt through the Sudan. And while touring in some places of the country he has been very much impressed by the beauty, art deco buildings and the diversity of the people. Since then he has been to Eritrea for about 20 times in different seasons.

Mr. Jose-Marie Bel is ethnologist, historian, architect and artist. His profession coupled with the experience he gained by touring to the different countries in the region developed his passion and began to give real attention on the people, their history and social structure. The one thing he decided to do has been to collect ancient photos of the countries and organize exhibitions and write books.

Wednesday 17 of March is one of long thought ambitions of him about Eritrea. The photos which are 82 in number depict the art deco buildings in all over the country, historical sites, the nine ethnic groups, places of worship of the different religions, traditional houses, traditional dresses of different ethnic groups, the Eritrean stunning landscape  and others of special interest. The photographs have been produced between 1900 and 1935/6. Some of the buildings, the cable way connecting Massawa with Asmara, the Loterina locomotives are no more on the surface but have become long existing memories.

Mr. Marie collected the photographs from individuals residing in France, the UK, Germany and Italy. Many of individual which have been holding the photographs told Mr. Marie that they belong to their fathers or grandfathers. It is known that the holders of the photographs have been to Eritrea. But they clearly attest that Eritrea has been one of the early civilizations in the region and for that matter in the continent.

The purpose for organizing the exhibition is to give the Eritrean people and especially the young the opportunity to discover and enjoy the Eritrean cultural and historical heritages. And indeed many people that have the opportunity of visiting the exhibition have expressed their appreciation and posed some questions to where these photographs have been. They have been photographed and printed in Eritrea and that means modern photo

printers existed in Eritrea way back from 1900.

According to Mr. Jose-Marie Bel the exhibition would be touring to some cities in the country for some time. And later he hopes to organize similar exhibitions in Paris and Italy and after that publish a book detailing his experience about Eritrea and its wonderful people and culture.