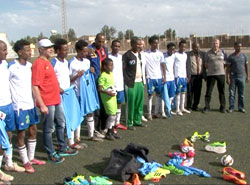 City Centre Club in the Central region has secured  sports equipments worth Euro 20 thousand in donation.

Mr. Mussie Teklemariam, Chairman of the Club, said that the goodwill gesture was made by German profession football player member of Real Madrid Club Sami Kedira and his brother, Rami Kedira. He indicated that the items comprise balls, shirts and shoes, and that it would be channeled to reinforcing sports activities at grassroots level.

Dr. Yens Pitter, a German citizen who handed the donation, stated that the initiative is aimed at backing the substantial investment made by the Government towards developing sports at national level in general and grassroots activities in particular.