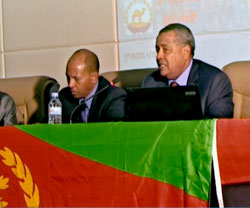 Eritrean nationals residing in Angola have asserted readiness to step up participation in the realization of national development goals.

Asmara, 24 March – Eritrean nationals residing in Angola have asserted readiness to step up participation in the realization of national

development goals. They made the commitment at a meeting in Luanda city with Mr.  Saleh Omar, the Eritrean Ambassador to South Africa and the Southern African region.

The Ambassador explained that training and educational programs are being implemented in the Homeland towards raising the capacity the youth, coupled with substantial investment. Ambassador Saleh further called on the community members to live up to expectations through demonstrating higher organizational capacity.

The participants of the meeting voiced readiness to mount staunch resistance against external conspiracies on the basis of enhanced awareness.

In a related report, the Eritrean nationals in Angola donated over USD 40 thousand and materials worth USD 100 thousand in support of victims of flooding witnessed in Angola’s Benguwela province.

A representative of the Angolan government who received the donation explained that such initiative is the  first of its type foreign nationals and expressed appreciation on behalf of the country’s people and government.