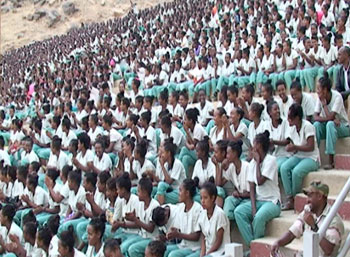 Speaking at the concluding ceremony in which Brig. General Tekle Libsu, Commander of Training Center for the Eritrean Defense Forces, and

the Commander of the National Service Training Center, Col. Debesai Gide, invited guests and students took part, Mr. Kelit Girmai, Director of the School, stated that about 11, 500 students, out of whom 42.6 are females, from Secondary school across the country have pursued studies in Warsai Yikalo Secondary school.

He also indicated that a number of activities have been accomplished, including peer education, tutorial class, pre-test, sports competitions and education-related contests, among others, thus bearing encouraging outcome.   Moreover, Mr. Kelit noted the significance of the School as regards nurturing competent youth who would uphold the nation’s values, in addition to the academic pursuit.

Students who demonstrated academic excellence and exemplary teachers received awards on the occasion.

Wasai Yikalo Secondary School was launched in 2003 and about 170 thousand students have so far pursued studies there.