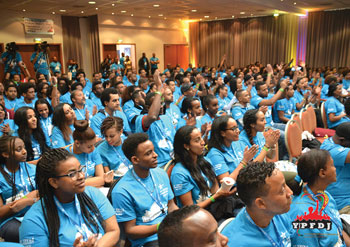 At the 11th YPFDJ Conference Europe Chapter in Frankfurt City, it was underlined that the organization has played active role towards organizing conscious youths who would demonstrate higher  dedication in multifaceted State affairs.

Europe Chapter in Frankfurt City, it was underlined that the organization has played active role towards organizing conscious youths who would demonstrate higher  dedication in multifaceted State affairs.

In a report she presented on work accomplishments at the conference, Eden Kebede, Chairperson of the Managing Committee, explained  that vigorous endeavors have been exerted towards organizing youths as regards possessing enhanced national principle, enhancing the contribution of the youth in national development programs and mounting staunch resistance against external conspiracies, and thus portray Eritrea’s correct image.

Also speaking at the conference which is being attended by about 700 youths from inside the country and abroad, Mr. Saleh Ahmedin, Chairman of the NUEYS, pointed out that the Union is a continuation of the struggle of Eritrean youth for self-determination. He further noted that the NUEYS was founded in 1978 by the People’s Front.

Mr. Saleh went on to indicate that the Union has exerted the necessary effort for the attainment of independence, and safeguarding the nation’s dignity and all-round progress. Moreover, he indicated that it is exerting relentless

effort for more gratifying outcome through enhanced organizational capacity, and asserted that the NUEYS would work jointly with YPFDJ organizations.

In briefings he gave on the occasion, Mr. Yemane Gebreab, Head of Political Affairs at the PFDJ, underlined that the staunch popular resistance, including the youth under the leadership of the People’s Front against multi-faceted anti-Eritrea conspiracies has enabled the country to safeguard peace and stability. Indeed, dealing staunch rebuff to enemy hostility and smear campaign ensured Eritrea’s success to become an island of peace in a region where chaos and terrorism prevail, the PFDJ official elucidated.

Foundation in the US, noted the significance of organization and the contribution being made by the YPFDJ members in the nation-building process.

The participants of the conference put forth a number of proposals with a view to further strengthening organizational capacity of the youth towards stepping up all-round endeavors in State affairs, including that of drawing up action programs for reinforcing the development drive in the Homeland.