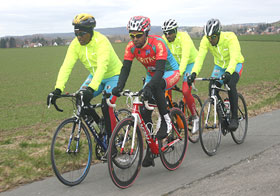 The organizers of the Cycling Tour for the “Truth, Peace, Justice and Eritrea” said that it is gaining momentum.

Asmara, 06 April 2015 – The organizers of the Cycling Tour for the “Truth, Peace, Justice and Eritrea” said that it is gaining momentum. The Tour is being conducted in various cities by Eritrean nationals in the Diaspora in connection with the 13th anniversary of the final and binding ruling of the Eritrea-Ethiopia Boundary Commission (EEBC) on border delimitation.

They told Erina via telephone that the Tour got underway on March 31 from Gutenberg city and reached Frankfurt on April 5 crossing the cities of Betel, Hamburg, Hanover and Kassel.

The program’s participants from Sweden, Denmark, Norway, Israel and other countries received warm welcome upon arrival in Frankfurt by the participants of the 11th YPFDJ Europe Chapter Conference.  Along the way, they held meetings with officials of a number of cities regarding anti-Eritrea conspiracies.

The Cycling Tour is aimed at calling for an immediate and unconditional implementation of the Boundary Commission’s ruling and an end to Ethiopia’s occupation of sovereign Eritrean territories, besides putting an end to the illegal and unjust UN sanctions against Eritrea.