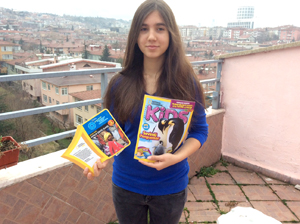 She is only 14 years old and grade nine student.  One of her main hobbies is visiting different places of interest and taking photographs. One day she hopes to become an accomplished photographer. Her name is Aynur Deniz Sunel. She is the daughter of Mr. Firat Sunel, Ambassador of the Republic of Turkey to Eritrea.

Mr. Firat has been working as Ambassador of the Republic of Turkey to Eritrea for about one and half year now.  Within this short period of time of her father’s assignment Aynur visited Eritrea for four times. Her first visit has been solely to visit her father but the remaining three has been also in her words “Eritrea is a wonderful place to come. The beautiful people, the Art Deco buildings, the landscape and the Red Sea are what motivate me to frequent my trip to Eritrea besides visiting my father.”

Aynur has been to different countries in which her father has been assigned as a diplomat. But she says that from all the countries she visited it was Eritrea that she enjoys most and left an urge in her mind to frequent visiting the country.

In August 2014 Aynur has been to Eritrea during which the Eritrean National Festival has been underway. That occasion gave Aynur the opportunity to observe Eritrea’s different ethnic groups with their different traditions and cultures displayed in a single compound, the Expo. As she likes colorful costumes she has been very impressed that many ethnic groups in Eritrea fond to wear colorful dresses. She is more interested in taking photos of children.

While visiting the Festival Aynur took many photographs as possible depicting the life style of the Eritrean people,

their traditional house, household items, customs and dances, and other events that she feels are interesting. Upon her return to her home country she sent one of her photographs she called “Dancing Colors” to the National Geographic Kids magazine Turkish language edition.

The magazine is published every year and invites amateur children photographers up to 14 years of age to send photos for competition. Aynur Deniz Sunel decided to send one of her photos that she took in Eritrea during the national festival. I asked her whether she has been expecting to win and she said that she only send the photo for participation and had no expectation that it would be price winner. To answer to my question to “Why not?” she said “The magazine had never entertained photos of other countries and especially from Africa.  And with that in mind I could not have any expectation”.

To her surprise the photo “Dancing of Colors”, a photo of a

young Eritrean girl that came from one of the regions in the country to participate in the National Festival stood third in the National Geographic Turkish language edition competition and became a price winner. The magazine is widely circulated in the country and to have recognition in that magazine is highly regarded and Aynur could not control her delight for realizing one of her most valuable dreams in her life and especially at this age. The price is an added input for her future carrier as a photographer.

I finally asked her on her future plan and she said “I am still young to decide of my future. God willing one day I will have a photo book on Eritrea in my language and in English. For that I have to frequent visiting Eritrea and know more about the country, its people and history. I really want to do that because I love Eritrea”.

Aynur is fluent in English, French and German besides her native language, Turkish. She is cute and with a lot of prospect.