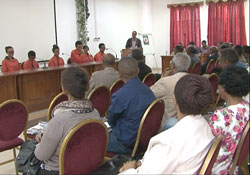 World Health Day was commemorated yesterday in Asmara at national level for the 20th time with various activities under the theme “From Farm to Plate, Make your Food Safe.”

Asmara, 08 April 2015 –World Health Day was commemorated yesterday in Asmara at national level for the 20th time with various activities under the theme “From Farm to Plate, Make your Food Safe.”

Speaking at the observance event at Orotta National Referral Hospital, Dr. Andebirhan Tesfatsion, Director General of Public Health in the Ministry of Health, pointed out that the Ministry has been organizing promotional activities to raise community awareness regarding proper handling of food resources.  He also stated that about 2 million individuals die yearly worldwide due to contamination of food and water. In this connection, Dr. Andebirhan called on the general public to practice proper utilization of food resources apart from prevention of food poisoning.

Mr. Semere Gebregergis, WHO Representative in Eritrea, stressed the significance of practicing the necessary care in the process of food production.

Dr. Suleiman Braimoh, UNICEF Country Representative, explained on his part that contaminated food entails dire consequences on pregnant mothers and children. Eritrea’s achievements in reducing mother and child mortality rate attests to the endeavors being exerted to this, he added.

Anseba region: Stepped-up effort being made as regards avoidance of harmful customary practices

Over 63 million Nakfa disbursed to families of martyrs