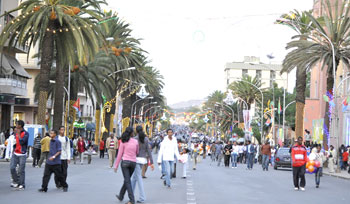 The United Nations has different branches that govern nations; the Security Council is the power house of the organization with primary responsibility to maintain international peace and security. The Council has 15 members; 5 permanent members with great Power unanimity; they are China, France, Russia, United Kingdom and United States. The Five Great powers can declare war, impose economic sanctions, negate admission of new members, appoint Secretary-General, and elect judges to the International Court of justice and exercise trusteeship function of the United Nations. The 5 permanent members are the Imperial Monarch of the United Nations; democracy in its abstract form.

The division that the UN is most proud of is the Human Rights section which supposedly provides universal and internationally protected code of human rights. A broad range internationally accepted rights; economic, social, cultural as well as civil and political rights. One of the achievements of the United Nations is the creation of Human Rights Law inclusive of economic, social, cultural as well as political and civil rights.

UN human rights commission is once again screaming foul unfoundedly. Eritrea’s record in its respect of Human Rights Law inclusive of economic and social rights is of good standing. Owning your residence and free land to farm at your birth village is not a privilege but your national right , women’s right, the right to work and social protection adequate standard of living, free education, health and social services are all rights valued in Eritrea. The fundamental rights and the dignity and worth of the person are cherished. The rights to education, cultural

freedom, the right to trade without distinction as to nationality, sex, religion or language are equally respected. The right to petition is prized and Death penalty is abolished. Freedom of association, participation in public affairs and elections in the local governments are attained. Some people argue that there is no national election and democracy; without taking into account that the nation is in no war no peace situation. National institutions to facilitate and convey us to a national election are being formed. Hence with time predicament of national election will be resolved.

Human rights groups who campaign against violations of political rights often ignore the economic and social rights which are the prerequisite for political rights. Eritrea has historically been a nation of close knit society that has fought its colonizers in unison and is now working hand in hand to develop the nation. Issues that are misleadingly brought up as a violation of human rights are National Service and Religious freedom. In Eritrea there are churches, mosques and a synagogue, everyone has the right to worship A God of their choices. All religious institution has to abide by law. The religious law does not allow retail religions’ that are practiced in individual homes by uneducated “fast tong” sells people who haven’t acquired certification. National service was a one year and half program to serve in the national development program. In 1998 due to Ethiopia’s aggression; mobilization of the populations was needed to defend the country, as it’s the duty of the citizens to come collectively and foil the invasion. It was continued for some years for national development purpose and to ascertain the capability of the nation to defend its borders. Presently national service is back to one year and half; modest as it may be people have salaries.  Eritrea is a nation that labored, sacrificed its youth to the betterment of economic, social, cultural, civil and political rights. Right is based on law from real laws come real rights, from imaginary laws fancied and invented by great powers are invented rights. Quislings and stooges have twisted; lied recounted the issue of national service for disinformation and propaganda with their imaginary law and self rightness.

If we look around our world we can find countries that have most awful records on human rights yet have not been labeled as such. The streets of Bombay, Lagos, Nairobi, and Addis Ababa are cities that you find millions of their citizens sleeping on the street neglected of their economic rights. Many of the urban cities of Africa are known for their street children and teenage prostitute in violation of their basic natural rights. Racial discrimination is rampant in Europe and young black kids are gunned down on the street of America. Women are paid less than men and in some countries women are not allowed to drive cars. The Syrians, Iraqis and Libyans who are dying in millions have no protection and human dignity the UN human rights laws are abstract; not applicable.  People have certain natural and irreversible rights; that all human have the rights to health, food, employment and equal distribution of national wealth. Is that the case in the developing countries?

Eritrea has professional army, navy, air force and Special Forces. In addition, Eritrea has people’s army (Hezbawe Serawite) trained and ready to defend their national interest. It should be of no surprise to anyone that Eritrea is a nation with well trained army and it will continue as such because it is part and the essence of being an Eritrean. Quislings and stooges; who haven’t studied Eritrea’s history, never visited or who have been absent for more than 15 years, are professing themselves as experts claiming that the military service is never ending, there are no religious freedom. The truth of the matter is the facts on the ground; known to UN human rights commission that have turned a blind eye.

Eritrea is marching towards securing a better living standard for its nationals. Its development in food security, education, health, electrification, clean water, and infrastructure are some of the achievements. Eritrea will ensue with its independent political path and self reliance will not scum to the interest of multinational cooperation and neocolonial powers. The Security Council has failed Eritrea after WW II, and again in this century unable to enforce an agreement that it is part of; namely the border demarcation between Eritrea and Ethiopia where the Ethiopian government is in violation of International law. The Human right violation echoed in the UN Human Right Commission is self serving narratives collected from stooges and quislings with no substance. Eritrean People’s Liberation Front and the Government since inception have made Human Right the pillar of their political principles.

“The book and the film “Wedi Hadera has been the greatest gifts in my life”: Wedi Hadera