“The book and the film “Wedi Hadera has been the greatest gifts in my life”: Wedi Hadera 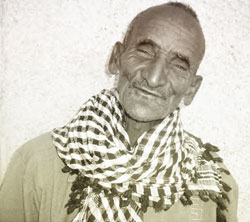 After the end of the film a special guest came to the podium at an invitation of Mr. Alemseged Tesfai. That special guest was the owner of the story Mr. Woldemichael Fitur (a.k.a. Wedi Hadera). Our guest today is Wedi-Hadera. Excerpts of the interview follows.

-Please tell us about yourself?

I don’t actually remember the year I was born. I am somewhere in 80 years old. I was born at Deki-Shehai and when I was a child I moved with my parents to Badime and I grew up there.

-Why did you move to Badime?

The land is very fertile and as farmers we went to a better place for farming. I was there working as a shepherd.

During that time grownups used to go to the bush for living as part of demonstrating their manhood.  And I, like others, went to the bush to live. Such a behavior has been considered as bandits. And people used to respect you because they took you as a hero.

-For how many years did you stay in the bush?

I lived there for about five years.

-The film that has been inaugurated on the 28 of March narrates your history and it has been first written in the form of a book in 1985. When and where did you meet with the writer of the book, Mr. Alemseged Tesfai?

After he heard my story, Alemseged came to Nakfa where I have been stationed as EPLF combatant and he told me that he wants to write my story. At first I tried to tell him that I have no history worth to be written. But he convinced me and I told him the entire story that I had to go through.

-How did Mr. Alemseged came to know about your history?

Once I have been at Seber-Kete medical center recovering from my wound. At that time several combatants including the late artist Isaias Tsegai were there. I used to tell them my past adventures in the bushes. And the story reached Alemseged Tesfai. With that he came to meet me in 1984 at Jelhanti.

-How did you feel when the book was published?

I was very much exited. I feel that was the greatest gift in my life. And when I saw the film I have no words to describe my happiness.

-How far did the book introduced you with the public?

After the publication of the book many combatants started talking about me. And after independence a lot of people talk about me whenever they see me walking on the street.

-When did you come to know that the book was to be produced in the form of a film?

Alemseged called me to Asmara and told me that the book is to be produced in the form of a film. I automatically agreed and wished them good luck. And I was cordially invited at the inauguration of the film.

-How was the inauguration ceremony?

It was fantastic and beyond my expectation. I have been for the first time to the Cinema Hall and when I saw many people there to attend the ceremony I was very proud.

-How did you find the film?

It is fantastic. It tells the whole story. And I liked the main character that represented me. He did it very well.

-What are you doing in Ali-Gidir?

I am in Ali-Gidir as a farmer and I live there with my family.

-How did you get the nick-name Wedi Hadera?

It in the 60s. One from our colleagues gave me the name.

-Wedi-Hadera I hope we shall meet at the inauguration of the second part of the film and thank you.