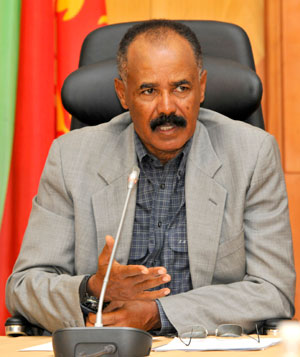 Eritrea’s Cabinet of Ministers held a meeting this morning at the State House. The session focused on incipient irrigation schemes as well as the extensive agricultural program for 2015 slated for implementation through traditional and modern farming techniques.

Asmara 14 April 2015- Eritrea’s Cabinet of Ministers held a meeting this morning at the State House. The session focused on incipient irrigation schemes as well as the extensive agricultural program for 2015 slated for implementation through traditional and modern farming techniques.

In opening remarks during the opening session, President Isaias Afwerki outlined the purpose of the program drawn up to develop land productivity and enrichment of water resources, transform agricultural production into modern stage, promote land restoration and thereby ensure soil and water  conservation vis- a- vis  the set programs for development of irrigation farming in this year.

President Isaias went on to explain in detail the enhancement of the envisaged irrigation schemes that will be implemented in three development zones in western, eastern and central highlands. The integrated approach includes development of infrastructural facilities, energy supply and related components so as to boost higher production in cereal output, fruits and vegetables. The increment development of the agro-industrial sector will constitute another vital component of the integrated

In this respect, President Isaias gave extensive elaboration on the concerted action that needs to be taken regarding judicious utilization of basic resources such as energy, machinery, seeds, fertilizers, pesticide, transportation, among others, apart from project management.

Thereafter, the Ministerial Cabinet referred to a working paper presented by the Minister of Local Government on the Agricultural Program for 2015. The program envisages the cultivation of more than 568.000 hectares in the forthcoming rainy season. This represents 10% growth compared to that of 2014.

Following the briefings by President Isaias and the Minister of Local Government, Mr. Woldemichael Abraha, the Cabinet conducted in-depth discussions on the preparations that need to be made prior to the onset of the rainy season, including that of proper deployment of machinery, budgetary allocation vis-à-vis priorities, among others. Subsequently, the Cabinet of Ministers adopted the necessary work directives.