Dialogue is Precluded by the EEBC Ruling 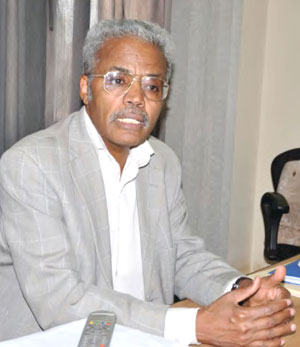 The Director of the Eritrean Center for Strategic Studies Dr. Ahmed Hassan Dahli gave an interview in connection with the 13th anniversary of the ruling by the Eritrea-Ethiopia Boundary Commission (EEBC). The second and final part of the interview’s summary follows:

1. H.E. President Isaias Afwerki affirmed the following in his letter to the EEBC President on 19 November 2007:

• “… Had the Algiers Agreement been respected, the final and binding Award fully accepted, and the demarcation of the boundary expeditiously completed, the peoples of Eritrea and Ethiopia would long ago have returned to their natural state of neighborliness and cooperation…”

2.In a letter addressed to the President of the EEBC on 27 November 2007, the Minister for Foreign Affairs of Ethiopia stated that “neither Eritrea nor Ethiopia have accepted the Commission’s demarcation coordinates.”

The Ethiopian Foreign Minister had no authority to speak on behalf of Eritrea, because Eritrea had already affirmed its position in a letter to the Commission by President Isaias Afwerki.

3. Prof. Lea Brilmayer, the Legal Adviser to the Office of the President of Eritrea, wrote a letter to the Commission President on 29 November 2007 saying that Ethiopia was “wrong to state that neither Eritrea nor Ethiopia have accepted the Commission’s demarcation coordinates” and af-firmed that Eritrea acknowledged as both final and valid the coordinates that the commission had specified.

4.On 30 November 2007, the Eritrea-Ethiopia Boundary Commission issued its final press release from The Hague, reiterating that the boundary line stood virtually demarcated, accompanied by a list of coordinates identifying the points through which the boundary runs, all in accordance with the Delimitation Decision of 13 April 2002.

5. In his 26th report to the Un Secretary General, Sir Elihu Lauterpacht, the President of the Eritrea-Ethiopia Boundary Commission, reiterated:

• “In stipulating that the  boundary now automatically stands as demarcated by the boundary points listed in the annex to the 27 November 2006 Statement, the Commission considers that it has fulfilled the mandate given to it.”

• “The Delimitation Decision of 13 April 2002 continues as the only valid legal description of the boundary.”

•Eritrea has accepted the Delimitation Decision of 13 April 2002 and communicated a detailed response to Ethiopia’s contentions claiming otherwise in letters to the Commission from the President and its Legal Advisor.

• “Signed copies of the maps illustrating the coordinates were officially sent to the Parties on 30 November 2007. A copy will presently be deposited with the United Nations and another copy for public reference will be retained in the office of the United Nations Cartographer.”

The Ethiopian government, with the support of third parties, continues to engage Eritrea in dialogue, insisting that it’s committed to negotiations “for the implementation of demarcation.”

In his memoir “Surrender Is Not an Option: Defending America at the United Nations and Abroad” (2007), former U.S. Ambassador to the U.N. John Bolton stated that in February 2006, Jendayi Frazer, Assistant Secretary of State for African Affairs, informed him that she wanted him to “reopen” the 2002 EEBC decision. He further said that he didn’t because he “was at a loss how to explain that to the Security Council…”

The present Ethiopian Prime Minister, just like his predecessor, has been uttering futile game of semantics like “readiness to go to Asmara” and offers for “dialogue” with Eritrean President.

Ethiopian rulers, including the Prime Minister, know very well what they need to do before even considering negotiations with Eritrea:

•Withdraw from Eritrean territory identified in the Delimitation Decision of 13 April 2002.

•Refrain from any military or other provocations.

•Respect and abide by signed treaties.

On the international characteristicsof the EEBC Ruling …

1. The verdict came from a Commission established under the registry of an International Court.

2. The border between Eritrea and Ethiopia was demarcated on the basis of pertinent colonial treaties and applicable international law.

3. The Agreements that serve as reference for this decision were signed in the presence of and guaranteed by the UN Secretary General, the Chairperson of the Organization for African Unity (African Union), as well as the envoy of the EU Chairperson.

4. The United Nations Security Council was charged with guaranteeing the EEBC ruling without preconditions and enforcing both parties to accept and implement it.

5. All documents of the Commission, including its 13 April 2002 Decision, have been deposited with the United Nations archives in New York and the International Court of Arbitration archives at The Hague.

6. Like I mentioned earlier, the Commission President communicated his final report, to the UN Secretary General pointing out that the border stood demarcated in accordance with the De-limitation Decision of 13 April 2002 and that it remained as the only valid legal description of the boundary.

Every country in the world, except Ethiopia, supports the EEBC Ruling and calls, at least at the theoretical level, for its implementation. The only reason why the UNSC has been unable to force Ethiopia is the United States. Despite relentless efforts on part of the Commission President to satisfy the UNSC and the Ethiopian government and begin actual demarcation, it failed to gain positive support, especially from the US government. The US support for Ethiopia emanates from the latter’s unconstructive role as a US agent in the Horn of African and Great Lakes region.

The UNSC, which turned a blind eye when Ethiopia invaded Somalia in the end of 2006, resorts to passing unjust and illegal resolutions when it comes to the Eritrean context. The resolutions passed in 1950 (to federate Eritrea to Ethiopia) and in 2009 (sanction resolution evoking Chapter 7of the UN Charter) are clear examples of the UNSC’s passive attributes. And with all its shortcomings, it would only be a misconception to think that the UNSC can actually fulfill its mandate.