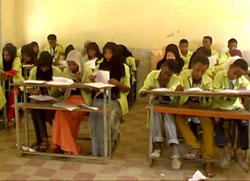 Substantial investments made in education has resulted in tangible outcomes.

Ginda, 29 April 2015 – Substantial investments made in education has resulted in tangible outcomes. This is manifested both in the spike of functional schools and students in the sub-zone.

Mr. Saleh Ahmed Mohammed, branch-head of the Ministry of Education,  stated that there are currently 12 kindergartens, 23 Elementary schools, 13 Junior and three Secondary schools in the Ghinda sub-region.  This represents  an average, four-fold, increment since independence.

He also indicated that special schools are providing services for children who had lost the opportunity to be enrolled at the right age in Shebah, Metkel-Abet and Adi-Shuma.  Two new Elementary schools will also be opened in Ginda town soon.