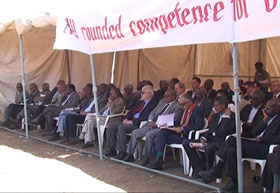 The 125th anniversary of International Workers Day was today marked across the nation.

Asmara, 01 May 2015 – The 125th anniversary of International Workers Day was today marked across the nation. Ministers, Senior PFDJ officials, Army Commanders, diplomats, heads of national associations, representatives of workers and invited guests attended the observances in the Central region.

In a speech he delivered on the occasion, Mr. Tekeste Baire, Secretary General of the National Confederation of Eritrean Workers (NCEW), explained that Eritrea is making substantial investment in the domains of infrastructure, human resource and institutional development. Likewise, Mr. Kahsai Gebrehiwet, Minister of Labor and Human Welfare, noted the heroic role of Eritrean workers in the days of the armed struggle for independence.

In the same vein, Mr. Yemane Gebreab, Head of Political Affairs at the PFDJ, pointed out that this year’s International Workers Day observance is taking place at a time when the nation is laying solid ground for sustainable development.

A solidarity statement by the Congress of South African Trade Unions (COSATU) was also conveyed by the South African Ambassador to Eritrea, Prof. Iqbal Jhazbhay. He expressed admiration for Eritrea’s principled and courageous position on the matter of the pressing need for radical African ownership of its resources, amidst spiraling economic imbalance in Africa.

A number of performances were staged by members of the NCEW, thus adding color to the International Workers Day observances.