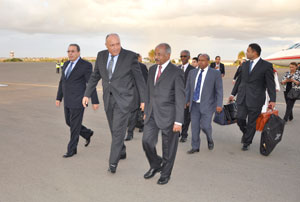 Asmara, 06 May 2015 – The Egyptian Foreign Minister, Mr. Sameh Shoukry, arrived in Asmara tonight on a working visit. He was welcomed at Asmara International Airport by his Eritrean counterpart, Mr. Osman Saleh.

During his stay, the Egyptian official would hold talks with President Isaias Afwerki and Mr. Osman Saleh respectively on strengthening Eritrean-Egyptian relations of partnership, as well as regional and international developments.

Foreign Minister Sameh Shoukry told Erina that in line with the understanding previously reached between the leaders of the two countries, his current visit to Eritrea is aimed at further strengthening the longstanding historical relations between Eritrea and Egypt.

It is to be recalled that President Isaias attended the swearing in ceremony of President Abdelfatah Al-Sisi of Egypt in September 2014.