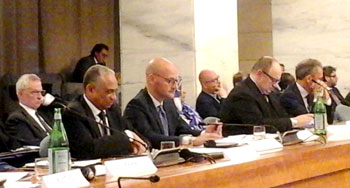 Eritrea participated in a conference held in Rome this week to assess the multi-layered consequences and ramifications of sanctions imposed on individual countries.

Asmara, 13 May 2015 – Eritrea participated in a conference held in Rome this week to assess the multi-layered consequences and ramifications of sanctions imposed on individual countries.

The one-day conference, held under the theme, “Italy and Sanctions, when geo-politics collide with markets”, was sponsored by Farefuturo Study and Research Centre.

Besides Eritrea, four countries currently under various sanctions, namely the Republic of Sudan, South Sudan, Russia and Iran, as well as officials from the Italian Foreign Ministry, the National Parliament, and representatives of workers’ confederations, industry, and, research centers, among others, attended the conference.

Eritrea’s Ambassador to Italy, Mr. Fisehatsion Petros, underlined that the sanctions imposed against Eritrea did not occur from the latter’s violation of international law or the Charter of the United Nations.   They were imposed purely for political motives and ends.  Ambassador Fisehatsion emphasized that the unwarranted sanctions against Eritrea were principally conceived to serve US geopolitical interests and to provide diplomatic succor to the Ethiopian regime by deflecting attention from its breach of international law and continued occupation of sovereign Eritrean territories. The unfortunate decision of European countries to kowtow to US stance was not justified.  Nor does it serve the interests of regional peace and security, Ambassador Fisehatsion elaborated.

In this perspective and as the hollowness of the original accusations against Eritrea are becoming more clear, the Ambassador urged

for remedial action through immediate and unconditional annulment of the sanctions.

Other speakers highlighted the deleterious consequences to global trade and investment especially when countries on which sanctions are imposed are in a position to reciprocate with a host of punitive measures.

Italy’s Vice Minister for Foreign Affairs, Mr. Lapo Pistelli, also emphasized, in his closing remarks, that sanctions entail economic hardships on the population of the sanctioned country while impacting negatively trade balances and healthy economic interactions.  The Vice Minister asserted that the consequences to Italy cannot be positive when sanctions are imposed on its trade and investment partners.