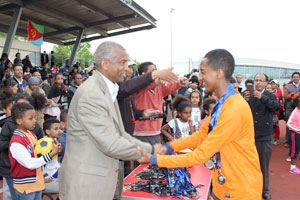 Asmara, 14 May 2015 – Football matches to mark the 24th Independence Anniversary were held in London this week.   Thirty two soccer teams took part in the tournament that attracted huge turnout from parents and the young in the Eritrean community in London.

Asmara, 14 May 2015 – Eritrean citizens in Melbourne and its environs held celebration for the 24th Independence Day anniversary. Representatives of Australian government institutions took part in the event.

Addressing the participants, Mr. Yasin Omar, in charge of Consular Affairs in Australia and New Zealand, stated that Eritrea continues to achieve tangible progress in the tasks of nation-building thanks to the unity and steadfastness of its people. Similar celebrations are scheduled to take place in several cities in Australia.

Ginda, 14 May 2015 – Elections for local administrators and managing directors were held in 17 administrative areas in Ghinda sub-zone.  Similar elections also took placed in Gash Barka in the sub-zones of Haikota, Logo Anseba.