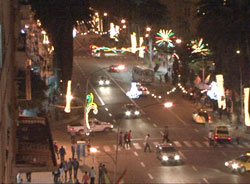 Asmara, 17 May 2015- The Asmara residents who observed the street performances in connection with the 24th Independence Day anniversary said that the popular participation is adding color to the celebrations.

The official Independence Day celebrations that commenced on 15 May are being highlighted with different activities in the streets of Asmara and in different Cinema Halls.

Asmara, 17 May 2015- The National Union of Eritrean Women (NUEW) on May 15 conducted a workshop in cooperation with African Development Bank aimed at reinforcing women participation in all sectors of development programs.

Ms. Tekea Tesfamichael, President of the Union, indicated that the workshop will contribute in identifying basic challenges the Eritrean women are facing and the means of resolving the challenges. She also commended the cooperation on the part of the African Development Bank.

Ms. Judith Ofori, representative of ADB, on her part said that the workshop is aimed at enabling women share their experiences and narrowing the gap existing in the society.

Asmara, 17 May 2015- Eritrean Air Force sports week in connection with the 24th Independence Day Anniversary commenced on 14 May.

The sports week that would be conducted until 7 June would include different sports competitions among the members of the Air Force units.

At the opening ceremony, in which Brig. General Teklemichael Habte, Head of Agitpro at the Ministry of Defense, Lieutenant Yohannes Teklemichael, member of the Air Force sports committee, said that the sport week is one of its kinds for it includes all members of EAF.