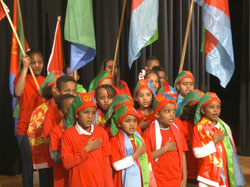 Asmara, 18 May 2015 – Eritreans living abroad are celebrating 24th Independence Anniversary in various ways.  In this connection, Eritreans residing in the Swiss city of Bern as well as those in Atlanta, the United States, have celebrated the event with colorful cultural shows and folk dances.  These events are invariably creating propitious platforms for participants to pay homage to Eritrea’s martyrs as well as pledge support to the nation-building process.

Massawa, 18 May 2015 –  Health services in the Northern Red Sea, characterized by even spatial distribution and equitable access, have increased markedly in the past decades since independence.

At the moment, over 60 health institutions are providing services to inhabitants of the Region.  New health services will be built this year in Bada, Irafaile, Embatkala and Ila-Babu Administrative areas.

Afabet, 18 May 2015 – Students Week encompassing Junior and Secondary schools was conducted in Afabet sub-zone as part and parcel of the 24th Independence Anniversary celebrations.