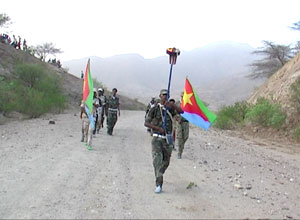 Keren, 19 May 2015 – Independence Torch was lit in Rora Mensa’e trenches to signal official commencement of celebrations for the 24th Anniversary of Independence.

The torch was lit by the Governor of Anseba region, Mr. Ali Mahmud.  The memorable event was attended by combatants of the liberation struggle and the general public.

Asmara, 19 May 2015 – Cultural performances were staged at Asmara Theatre and Cinema Roma yesterday as part of the celebrations of the Independence Anniversary

The plays in the Tigrigna and Tirge languages featured on the occasion illustrated the unparalleled heroism exhibited by self-less freedom fighters during the liberation struggle; the comradely rapport that was the order of the day during those years; and the radical measures that were introduced to combat regressive social practices and values.

Assab, 19 May 2015 – The Eastern Command held a sports’ week in the port city of Assab as part and parcel of the nationwide celebrations of Independence Day.  Brig. General Abraham Andom, Commander of the Forces in the Region, stated that the purpose of the event was not only celebratory;   but it was simultaneously aimed at nurturing solidarity among, and physical fitness of, the members of the Command.