Eritrea: A nation in progress 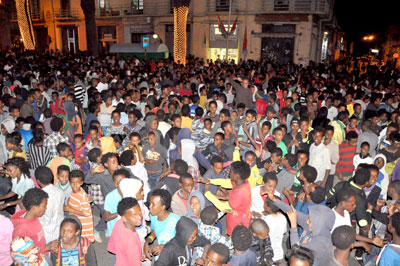 May 24, 2015 is Eritreans’ twenty-fourth Independence Day. Days of full excitement the weeks which proceed Independence Day, are historic. Educational institutions from elementary to higher education have been holding different activities earmarking the Independence Day celebrations including sports competitions, general knowledge competitions as well as cultural shows. The Eritrean Sport Federation inclusive of the six regions is holding competitive activities in all sports activities. Different ministries, local administrations and institutions are giving symposiums and dinner parties to their employees. Carnivals, musical shows, bazaars, and art shows are some of the highlights of the festivities. Street dancing and musical shows have been staged for two days at main street of Asmara. The Independence festivity embraced concerts by national artists, a German Musical symphony and a musical cultural group from South Africa in the Art Deco cinemas of Cinema Roma, Cinema Asmara and street Carnivals at the World known for its edifice and art deco beauty Liberty Avenue.

Eritrea declared its independence in 1991. With gold and abundance of high valued natural resources swirling around, there was no shortage of “carpetbaggers” coming to call. As elsewhere in Africa, suited and booted conmen brandishing their credentials flocked over the country like lions and predators around meat. Multinationals marched to the capital city to exploit natural resources with little reward to the nation. The Eritrean government treated them with high degree of skepticism rejected their ‘offers’ fully aware of their intentions. What followed were intensified conspiracies and sabotages to weaken the Eritrean Nation. There was no stone they didn’t turn to create internal division, religious discrimination, ethnic division, encouraged youth and skilled labor migration, the TPLF and its handler has waged three military offensives adding salt to wound the UN Security Council imposed two illegal, unfounded, unjust

sanctions on Eritrea: UNSC 1907 in 2009 and UNSC 2023 in 2011. All failed to diminish, subside, abate and wear off Eritrea owing to the unity of the population and strong leadership.

Undisturbed by conspiracies and impervious, the Eritrean Government based on the Golden Principle of Political and Economic independent and self-reliant free from external support and dependency started to implement its Social, Political and Economic programs. Independence means that those who have been on the underside of history must see that there is a qualitative difference between repression and freedom. And for Eritrean’s, freedom translates into having a supply of clean water, having electricity on tap; being able to live in a decent home and having a good job; to be able to send your children to school and have accessible to health care. Eritrea in the last 24 years has accomplished much with modest resources. Eritrea is amongst the first African countries certified for its endeavors on health management system. Skilful management system with well-equipped health care services is one from which Eritrea is best renowned. Health for all is the motto in Eritrea. The goal is to provide sustainable and excellent health care that is effective, efficient, accessible, acceptable and affordable to all citizens. Reduction of Child Mortality, Children vaccination, Quality Maternal Health, Eradication of Polio, Small pox and Malaria, combating HIV/AIDS rising life expectancy are a few examples of progress in the health sector.

Food security has been the priority; hence, Agro-Macro policy was devised, irrigation based agriculture was introduced to increase

output and create surplus in cereal corps, vegetables, fruits, and livestock. Dams, micro-dams and water diversion schemes are constructed. The numerous big and small dams constructed in the course of 24 years of independence are good examples that he country would produce surplus food productions in coming few years. In the last 24 years, the Eritrean Agriculture has emerged from subsistence farming to a modern agro-business. Realizing the need and education being the fundamental right that all nationals are entitled to, the government built elementary, junior and secondary schools in even the most remote areas assuring access and equity as well as quality and relevance of education. Nomadic educational centers and boarding schools constructed with a very high price to gain balanced education system. Ten colleges are now providing free higher education. Dental school and Cancer research center are recent addition to the education sector.  National construction companies are constructing housing, office buildings, roads, dams and food storages. Electrification is expanding the 24 hours services in Gash Barka region, clean environment electrification in the Southern Red Sea and Southern regions and the expansion of Hergigo are some of the major work with regards power supply.

Eritrea has been prioritizing improved water sanitation in order to alleviate people’s living standard. The dams, water reservoirs, embankments have now reserved abundant amount of water, urban and rural area have access to clean water. Social services are rights to assure social justice. Social welfare programs are available to orphans, disabled, parents and children of Martyrs and people with no means of income. There are 28,000 licensed foster homes to care for orphans. In 2014, transportation coverage has reached

85% of the population. Every city has an inter-urban linkage for transport. Bus routes have increased to 315. There are ample new buses to serve over 25 million passengers per year. Eritrea’s mining industry prospective in 2016 will be a contributor and have a multiplier effect in the economic growth of the Nation.

Resilience has paid off. Eritrea today has better infrastructure, health, education, electrification, transportation, food security and life expectancy.  Eritrea has become an international success story in terms of post conflict reconstruction and economic progress. Fulfilling basic social services and infrastructure it is now leaping and fast forward into the second phase of economic development. Freedom should not be taken for granted, it is the demands and aspiration of present and future generation towards its promise of peace, justice and prosperity.