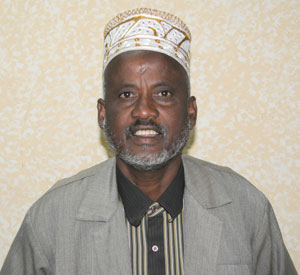 Salih Mohammed Omar (aka Saleh Afar) was born in 1955 in Ala, Ethiopia. He took his elementary school education there up to grade six. He is now head of Afar language service at the Eritrean Radio. He is our guest today.

-Saleh, I heard that you are fond of swimming and a big part of your life is associated with the sea. Tell me about that.

I have been working as fisherman and trader crossing the Red Sea to Yemen and Saudi Arabia since my early childhood. The sea is just like any other plain field for me. And if you spent enormous time in your life at sea it is normal that you will like it.

-Why were you going to Yemen and Saudi Arabia?

We had small ships and we take goats, fish, butter and honey for sale to those countries. And in return we come back with sugar, oil, and other consumer goods for family consumption. We were not as such merchants but young boys fond of adventure at the sea.

-What other activities have you been conducting at the sea?

That time, in 1973 to be exact as far as I understand the Eritrean revolution used to get supplies from the other side of the Red Sea. And I and my colleagues since we were frequenting crossing to the other side the sea and as Eritreans we were contacted by the liberation fighters so that we contribute our part in transporting supplies from Yemen.

-What items have you been transporting?

Many things that the liberation fighters need. We take the wounded fighters for medical treatment to Yemen. We also bring sandals, food supplies, ammunitions and other items the freedom fighters need for their daily life and to carry out their duties as fighters. There were also people coming from the highlands to join the armed struggle for independence and we used to transport them north to the training facilities. So beginning from 1973 I have been member of the clandestine organization.

-What challenges were you facing while transporting materials and people at the sea?

First of all travelling at sea is very dangerous. One has to endure the storm and heavy waves that could overturn the small ships. There was also the enemy. Sometimes war ships come directly to us and in other time war planes shoot at us. You have to be very careful and thanks that we grew up accustomed with any eventualities that could happened in the sea we didn’t encountered major problems until 1988.

We were in the middle of the sea and one big enemy war ship caught us. We had nowhere to go except give up and surrender. Among us there were some fighters but with civilian clothing. The others were civilians. I talked to them in Amharic that we were just civilians involved in fishing. They didn’t believe us and they took us to Massawa for interrogation. I was isolated from the others and interrogated in Amharic. They asked me to tell the truth and if not face the hardship. I told them that we sometimes are forced by the liberation fighters to cooperate in some activities as we cooperate with the Ethiopian soldiers when asked to do so. As we are civilians we have to do what they wanted us to do. With that I think they believed me. They thought I was telling outright truth for I hinted them if we didn’t cooperate with both sides we would be killed.

Then after some months one guy approached me and he took me to his office and said that he would release me on bail and after I am released from jail I would cooperate with them in providing information about the liberation fighters activities, how and where they hide the supplies they bring from the other side of the sea. I said I would and with that I was released. Knowing that I would not become stooge of the enemy and if I don’t I know the consequence. I had to flee and join the armed struggle for independence. And in the beginning of 1989 I joined the revolution.

-Where did you take your military training?

I took my military and political training in Ketan. After finishing training I was assigned with Division 70 as a combatant. I participated in the Operation Fenkil to liberate Massawa for the first time. I was not actually involved in direct military combat but carrying ammunitions and other supplies to the trenches.

-When did you participate in direct combat?

It was in 1991 at the Dekemhare front, the last offensive before Eritrea was freed from the yokes of colonizers. I was wounded twice there but they were minor injuries. And the first day, Friday 24 May, I entered with my unit to Asmara and immediately left north to capture the fleeing enemy soldiers.

I stayed with the army until 1994 and from there I was reassigned to the Ministry of Information and Culture with the Afar language radio program.

-You said you learned until grade 6, so how did you manage to become a journalist?

If there is a will there is a way. I was a strong reader. I used to read day and night and with that, I believe, I developed myself. You know since then I have produced several dramas, radio scripts and poems.

-What are you doing now at the radio?

I am head of the Afar language radio program. It is very much challenging but we are also improving by the day.

-We are conducting this interview on the eve of the 24th Independence Day Anniversary. What is independence for you?

Independence for me is not only making fanfares. It is the culture we developed since the days of the armed struggle that I am proud of. We are observing what is happening in many parts of the world. People killing each other on the basis of ethnicity and religions. Eritrea is very much blessed. The Eritrean people are known for their tolerance to each other and respect the culture and beliefs of others. This culture, I thing, has been solidified during the armed struggle. Every Eritrean is aware of respecting each other and living in harmony with each other is essential for peace and tranquility. That is what is exactly happening here, believing as one nation and people and trusting each other. And as Saleh I am proud of that.

I would like to say Happy Independence Day celebrations to the Eritrean people and its Defense Forces as well as to the friends of Eritrea.

Eritrea: A nation in progress