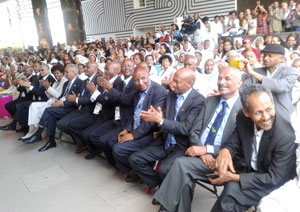 In a speech he delivered on the occasion, Mr. Woldenkiel explained that Eritrea achieved independence through long and bitter struggle, and stressed the significance of the Milan Expo as regards exchange of experience in the nation-building process.

The Minister went on to indicate that the Eritrean people and their leadership continue to exert relentless effort in soil and water conservation, in addition to mounting persistent endeavors to develop the agricultural sector.