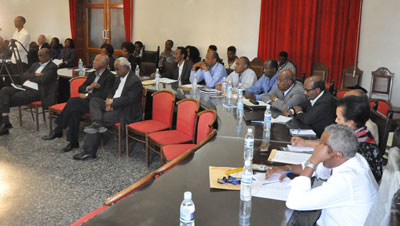 It is needless to mention that any given society has its own culture- a culture which glows with its own light. Culture, being a unique possession of communities and societies at large, needs not be placed under a different light rather than that of its own. That is why any culture needs to be preserved in a way that maintains its originality.  Thus, it is a prerequisite for any nation to have a law that governs how any cultural asset and generally all sorts of heritages should be dealt with and how their very existence should be secured.

Once preserved, they could be bequeathed to future generations without any lose of vitality that might happen with the elapse of time and due to lack of laws that help for such priceless assets stay alive. Culture and generally heritage is said to be the ‘mother of all sorts of development’.  The depth and intensity of philosophy harbored within cultural heritages and the vital importance of natural heritages have, therefore, been topics of great concern.

It is, thus, taking into account the very importance of such priceless assets that the Ministry of Education organized a two-day “Stakeholders Workshop on Eritrean Cultural and Natural Heritages Legislation” in collaboration with Asmara Heritage Project and UNESCO. But, why a comprehensive proclamation for Eritrea’s cultural and natural heritages? Why extensive discussions in the drafting and finalization of such a legislation? Why such a proclamation is needed at this time? How the reparation and expatriation of cultural items should be handled? How is this latest legislation different from the preceding ones? Who is entitled to the ownership of cultural heritages (tangible and intangible)? These and other topics were raised to be discussed in the workshop held at Central Region’s Administration Hall from 26-27 May 2015.

It is worth mentioning that the draft legislation has been prepared in a way that could be easily understood not only by experts but also by laypersons. The stakeholders present in the workshop and all the audience made extensive discussions about the linguistic aspect of the legislation and particularly on word selection (diction).

Efforts have been made to make this new legislation which comprises 40 articles and a number of sub articles a comprehensive one which incorporates tangible and intangible heritages as well as natural heritages.  As regards what is the visible difference between the new legislation and that of preceding ones and why is being prepared at this very moment, Mr. Senai Weldeab, the writer of the legislation said as follows:

Mr. Senai has also made it clear hat this legislation needs cooperation of national and international stakeholders. As regards UNESCO’s contribution he said: “UNESCO has been sending experts in assisting people working in heritages. We expect more from UNESCO because we are moving to the real phase of heritages. We will have a proclamation. We will have not only Asmara but possibly other cities including a number of intangible and natural heritage items that would be put in a world heritage protection list. We expect a lot from UNESCO not only financial but mainly professional assistance.”

It is worth mentioning that the legislation draft was thoroughly discussed line by line. Asked whether he finds the procedure satisfying or not Mr. Silverse Anam said: “The most satisfying phenomenon in this process is inclusiveness. The mix of experts that was present here in the panel was consistently evolved and was very focused in its making.”

Mr. Anami reiterated the fact that a lot of good work have been done in the background, it has now been posssible to do this work here in a few days which otherwise would have been done elsewhere in years.  “I could confidently say, the discussion we had in here were quality discussions and coming from experts whose ideas injected in the legislation should produce the best legislation.” He said.

What the newly drafted legislation shows is that members of the board yet to be established should comprise a panel of experts while interested individuals who have been working in the preservation of heritages could be invited as non-members to share the experiences they have.

The issue of repatriating and expatriating cultural items was among the topics which evoked deep discussions. The drafted legislation suggests that the appointed party should endeavor to repatriate by all means and in line with international norms any cultural heritages resource unlawfully taken from Eritrea and have been found in other countries. The repartition part of the legislation is also applicable to cultural heritage resources brought into Eritrea unlawfully.

As regards legitimate export of cultural heritage resources, it is stated in the legislation that a cultural heritage may be temporally taken out of Eritrea for scientific study, cultural exchange or exhibition upon expert permit by authorized body. “Every cultural item is unique and irreplaceable and thus needs to be preserved in the place of its origin,” was the dominant view shared by the participants of the workshop.

Mr. Anami is of the idea that the major aspect here is the appreciation that culture has not become but is created-created by communities and these communities need to be central in planning and even in the preparation of legislation concerning culture. Communities having involved in this legislation, I think, this will be the best legislation.

Responding to how the Kenyan experience would be injected into Eritrean context, Mr. Senai said: “Whatever experience Kenya had that we heard from Honorable Mr. Anami, we definitely are going to make use of it particularly on matters related to community and culture.”

Suggestions forwarded in the workshop pinpointed concerns about private and state interests with regards to ownership of heritages and that of encouraging interested individuals who have already been engaged in relics and antiques collection.  It was made clear in this legislation that private ownership issue has not been overlooked but is rather balanced, as much as possible, and alike to that of the state and international interests.

As regards what UNESCO’s expectation from Eritrea would be Mr. Anami Said as follows:

The expectation of UNESCO is that development of an instrument like the one we are working on. This will provide guidance and inspiration to the members of this society and to the Government and the people of Eritrea and indeed to the larger UNESCO family. UNESCO’s expectations are met by the interaction we had here through sharing of ideas and experiences. We are able to establish a policy to which UNESCO is interested-inclusive policies that inspire sustainable development and that create a platform where everyone contributes towards sustainable development. The richness of our cultural heritages and our cultural expressions in their diversity is so fundamental. It is a source of inspiration in the creation of peace around the world and in inspiring sustainable development.  So, legislation like the one we have gone through today is a very instrumental tool. It gives us the momentum; it sets the pace and gives us the confidence to move forward holistically. When we have a tool like this one which defines and articulates what this heritage is and which protects it, now we are left with a time to inject it in the fast moving technological world otherwise the world will move ahead of us.

Mr. Solomon Tsehaye, head of cultural Affairs at the Ministry of Education, has been keenly working in the preservation of cultural heritages. He has already extensively worked and published a book that deals with intangible cultural heritage and particularly in the preservation of oral tradition. His well researched book has now lit a flame of life to the oral traditions that were at the verge of extinction.

Mr. Solomon has shared his views as regards the impact of the discussions held at the workshop. “If a community, a country or people respect its cultural and natural heritage, it has to come up with a legislation that protects it. If there is no law that protects heritages you love, the heritage will be lost forever. That is the main point why we have been working hard to have this draft legislation come to this workshop and then have it later proclaimed. So, people would be bound by the law of heritages ,” he said.

Mr. Solomon went on to say that law alone is not sufficient. The law has to be well known and understood by the people.  If people are aware of the value of their heritage they will not destroy it once they know it is their identity. Hence, people’s awareness needs to be continuously raised.”

All matters related to heritages preservation have been thoroughly reflected in this new legislation. Culture is indeed life and making it stay alive is securing sustainable development.  Extensive discussions and consultations have now been carried out and the new legislation is just to be publicized very soon.