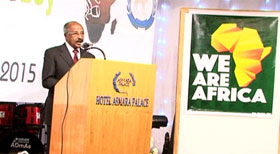 “Africa Day” has been celebrated on 30 May at Asmara Palace Hotel in the presence of Ministers, senior Government and Front officials, Ambassadors and representatives of international organizations.

Asmara, 31 May 2015- “Africa Day” has been celebrated on 30 May at Asmara Palace Hotel in the presence of Ministers, senior Government and Front officials, Ambassadors and representatives of international organizations.

In a speech he delivered at the occasion, Mr. Osman Saleh, Eritrean Foreign Minister, said that Africa has witnessed immense changes and transformation which include decolonization from imperial powers and the quest for emancipation of its people through enormous struggle and sacrifice, and that should have paved way for the desired objective.

He further stated that in the 60s the objective of the African states was to make the continent a place of peace, development and prosperity, unfortunately, this aspiration has not been fully materialized. He reiterated that some steps have been taken to transform the OAU to AU, and that has been without real and comprehensive need assessment.

The Minister also noted that external intervention and continued marginalization of Africa continued to be the main drive for conflicts in the continent, and as a result the image of the continent is gloomed by inter and intra-state conflicts, bad governance and corruption.

In concluding remarks, the Foreign Minister stressed that in order to solve the existing problems in the continent there should be harmony and respect among sovereign member states, establishing and getting better use of economic and security blocks and organs, as well as restructuring the African Union.

The occasion has been highlighted by South African cultural troupe “Sound of Diamond”, and Nigerian and Eritrean music bands.