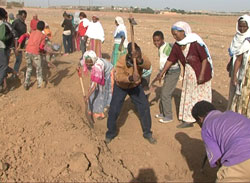 Keren, 7 June 2015- The residents of Adi-Fakai administrative area, Hagaz sub-zone, have pledged to reinforce financial and material support to martyrs’ families. They expressed their commitment at a meeting they conducted with Mr. Adm Seid, administrator of the administrative area.

The administrator indicated that every year in connection with the Independence Day anniversary and 20 June, Martyrs’ Day, they provide financial and material assistance to 5 martyrs’ families.

The beneficiary families expressed their appreciation for the support they received.

Asmara, 7 June 2015-  During a soil and water conservation popular campaign they conducted on 4 June, the residents of Adi-Sogdo expressed that they would reinforce participation for the success of the development programs in their area. They further explained that they have practically experienced the benefit of such popular campaigns in improving their livelihood.

Mr. Ateshim Araia, administrator of Adi-Sogdo, indicated that the residents have been engaged in such popular campaigns twice a week since December 2014.