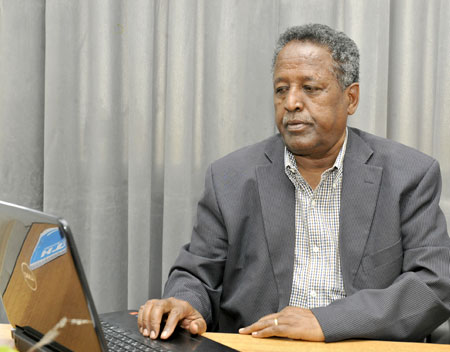 June 20, Eritrean Martyrs’ Day, is a day of great significance to Eritreans worldwide. It is an occasion where nationals reiterate their commitment to honor the fallen heroes. Parallel with this the Eritrean Government has been working in augmenting the martyrs’ trust funds on the basis of a monthly benefit scheme. On this special occasion Eritrea Profile conducted an interview with Mr. Mihreteab Fessehaye, Director General of the Human Welfare in the Ministry of MLHW.

– What is the impact 20th June Eritrea’s Martyr’s day has?

As we all know very well, 84.000 heroes and heroines of Eritrea, paid their lives to ensure our National independence and subsequent preservation of our country’s sovereignty. Our martyrs are from a broad spectrum of livelihood, ages, sex, ethnic, backgrounds across the country. They were all in their active and productive ages and took on the responsibility of offering hope for the survival of their people. This colossal and unprecedented human sacrifice laid the foundation for the vigilance and self – reliance of the general public which is playing a critical role in the reconstruction and development of our country.

Our martyrs are remembered in all our daily prayers. And indeed it has become the norm to open and close all our meetings, gatherings and National hollydays with a minute of silence of their remembrance.

That is why June 20 is commemorated by all Eritreans inside and outside the country. It is an occasion to solemnly remember the pledges we made to support their children, wives and parents. Most of all, during this day we renew our promises and commitments to build a prosperous country where social justice prevails.

Moreover, although this is almost a daily routine in the Eritrean families, it is an important occasion whereby the history of the sacrifice paid and success achieved must be retold and narrated to children and youth of the present generation born after the independence. This will ensure the nourishment of our hard won independence.

Therefore, it has become part of our tradition and culture to think about our martyrs in connection to the progress and commitment we make in the reconstruction of the country and the support we extend to the families of martyrs. 20th June 1982 was selected to be the official day to commemorate our martyrs mainly because; June 20th 1982 marked the end of the Six offensive in our victory but also marking the offensive in which the highest number of martyrdom.

– Tell us briefly about the assistance extended by the government to families of martyrs.

The policy and principles of the people and the Government of the State of Eritrea emphasizes the deep commitment it upholds to the martyrs’ families in order to revive and sustain their livelihoods. This is, of course, in harmony with the long lived tradition and culture of the Eritrean people to provide assistance to the needy and disadvantaged members of their community. Hence to realize the fulfillment of this noble culture and tradition of cooperation, the Government promulgated proclamation NO 48-1994, in which it is asserted that support of various kind will be extended to the families and dependents of our martyrs.

This proclamation, in effect, legally entitled the beneficiaries to claim for support. In 1994, the then new Government of the state of Eritrea gave 10,000 Nakfa to each of the martyrs’ beneficiaries. It was a period when it had limited resource at its disposal.

Although, the number of dependents of the survivors of martyr substantially increased after the border conflict with Ethiopia which lasted from 1998 to 200, he government despite its limited resources continued its support to the target beneficiaries.

This unflinching commitment on the part of the government was backed by proclamation NO. 137/2003 that ensures the allocation of safety net provision of a grant fund of Nakfa 500 a month for a martyr’s dependents –children, widows, spouses and surviving biological parents.

Although the ministry of labor and human welfare is entrusted with the overall responsibility of ensuring the implementation of the scheme, it is the National Insurance Corporation of Eritrea that disburses the monthly payments provided for in the proclamation. Starting 2004 to may 2010, the actual amount thus disbursed amounted to 2 billion Nakfa.

In addition to the above, the orphans of martyrs have been provided with long-term support to enable them to carry on their lives more smoothly. As part of this provision, volunteer extended families are given income generating support to host orphans of martyrs and to take care of their education, health and daily subsistence. In short, the long term goal of all the above initiative is to enable the disadvantaged martyr’s families to attain sustainable and self-reliant economic livelihood.

– How do you access the effectiveness of the monetary, moral and other support being extended by Eri-trean citizens residing inside and abroad?

In Eritrea, it is a long standing noble tradition for individuals and communal social problems to be, first and foremost, taken care of by the networks of the family, community and the general public. It is, indeed, a daunting task to quantify and recount all the monetary and non-monetary support given by members of community. Needless to say that it plays a critical role in the empowerment of families of fallen heroes – empowerment to enhance their ability to be productive and responsible citizens.

Such support takes many forms including tilling farm land, assist during harvest time, in kind sup-port in the form of grain and other farm products, labor support for the renovation of dwelling, etc. it is also a common practice for local traders and shop-keepers to give support in form of cash.

Eritreans in the Diaspora have been playing a proactive role in the implementation of this scheme. Support from Eritreans living aboard usually takes the form of sponsoring members of the families of martyrs. Periodic cash grant is given to families of fallen heroes. When such support is given in lump-sum (two years grant) it is quite often the case that it could generate substantial income when the beneficiaries invest it in petty trade or other appropriate income generating schemes.

In addition to the financial support, many Eritreans residing abroad have established personal contact with the families of martyrs’ whom they meet they come to their homeland. Besides, they have extended their additional moral and financial support to encourage martyr’s in their endeavor to be self sustaining. Such physical meetings between beneficiaries and benefactors have resulted, among other things, in (i) extending their support to families of martyrs to life-long: (ii) others increased their sponsorship to more than one family: (iii) still others rendered support to children of martyrs in king (school materials, clothes, and expenses to cover special events)

–  Do you have any message in connection with June 20th, martyrs day?

It is appropriate, at this juncture to reiterate that people and Government of Eritrea are fully indebted to our martyrs’, who bestowed their precious lives in the realization of the independence and sovereignty of our country.

But equally for their eternal remembrance for as all to remain vigilant and preserve this preciously attained independence and sovereignty: the values thus inculcated in the minds of all Eritreans have up-lifted their self-respect and esteem-self- respect including of course that families of the martyrs.

Last but not least, I would like to seize this opportunity to express my deep sincere gratitude for the support extended to the families of martyrs’ by all fellow citizens residing inside and outside the country. Moreover, I call upon all Eritreans to continue and strengthen their support to the survivors of fallen heroes and heroines. After all, it is by actively participating in such holy endeavors that we can all contribute to all livelihoods in the families of martyrs and hence contribute our share in the continuous preservation of our independence.

Commission of Inquiry Report: Devoid of Credibility and Substance