“…an active and deliberate policy of the E.P.L.F… to empower [Eritrea’s] ethnic languages” 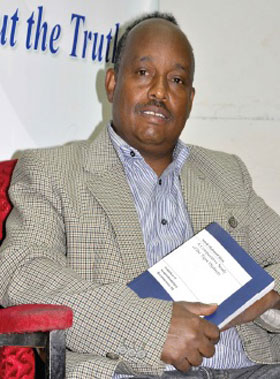 The book is actually a project that I worked on for my PhD; it was carried out as a doctoral dissertation during my stay as a visiting scholar at the FU Berlin. I present in the book, a comparative linguistic study of the Tigre dialects language at its lexical aspect, morphology, phonology and syntax features. In addition to this, it is also present a rich analysis that explores dissimilarity and similarities amongst the Tigre dialects.

The forty linguistic maps presented in the book are also there to be of a geographical illustrative example to the analytical conclusions I reached through the studies I conducted. The book is in English; therefore it could be of a directional access to anyone interested or anyone that desires to contribute to the linguistic study of our languages. In general the book consists of both scientific and social studies. I hope that the application is easily understandable and usefully informative.

Tigre is one of the most widely used languages in Eritrea. It is spoken in 3/4 of our country: it is mainly spoken in the Northern Red Sea, Gash Barka, Anseba and in many Tigre speaking regions of the Central region. Additionally, it extends its spread towards Eritrea’s western borders, as it is also widely used in the eastern areas of Sudan. So it obvious that Tigre, from a geographical point of view, holds the largest circulation in Eritrea.
And on a wider range; Tigre is the fifth largest Semitic language after Arabic, Amharic Tigrigna and Hebrew.
Moreover, what attracted my  interest in the Tigre dialects; is the fact that unlike other Semitic languages Tigre still has many, many archaic features that could aid us in finding liaisons to the Geez language.

It took me four years and a half of constant research, analysis and experimentation. Since I wanted to study the dialect I naturally had to travel to every area where Tigre is or was spoken. I looked even for the smallest characteristic that could bond me to the genesis of Tigre.
I started my research with no funding, so it was hard at first but the assistance of friends, family and colleagues that supported my cause made things easier for me. I traveled to almost every single part of the country; talking to the people, searching for geological variations in the midst of the dialects, documenting loads of audio materials, oral tales and song recitals.
I also used Prof. Anno Litmann’s book: a five volume study book conducted on Tigre in 1901-1905. Moreover thanks to the cooperation of Dr. Susanne Ziegler, Prof Rainer and many more I had the opportunity of visiting the Ethnologisches Museum in Berlin and accessed Prof. Rosen’s superb phonogram recordings of three Tigre songs, dating back to 1905, though only two were audible…

Languages are an immense part of civilization, by tracking dawn peculiar elements of our languages we could, with no doubts, trace ancient histories. Starting with the most evident fixation, the name for example, helped me comprehend that earliest inhabitants of some parts in Barka used to call their language “Hasa”.
I also learned that the same name was found in King Ezana’s inscriptions dating to the 4th century. And many more attributes that are explanations to the linguistic dynamicity, ancient people’s relations, and cultural evolutions as well historical impulses.

The standard Tigre that is currently practiced by different Eritrean communities was formally standardized in 1976 during the liberation struggle as a part of an active and deliberate policy of the E.P.L.F in order to empower the ethnic languages spoken in Eritrea. We now have a standard spoken and written usage of Tigre used in schools, books and media outlets.

The book is directed to

It is an educational book filled with grammatical, analytical and linguistic researches. So I strongly believe that it could be made to good use by scholars. Of course, I acknowledge my several shortcomings and also believe that there is further sighting that could be done and more to discover in our ethnic languages.
I hope that the research I’ve done so far could be used by the youth for compiling even greater advancements.

I truly want to thank every single one; starting from my family, friends, professors, colleagues and students, whom helped with my researches.
And I also want to express my profound desire of collaborating with young students and scholars to accomplish superior achievements in the linguistic grounds.

Asmara: A Museum of Architectural Treasures