Indeed a great day for Eritrea and Africa 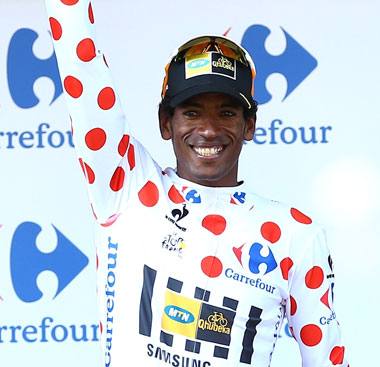 Yesterday, 10 July 2015, has been a great day for Eritrea and Africa. The Eritrean professional cyclist, Daniel Teklehaimanot made a big history as the first African rider to don the polka-dot jersey in the King of the Mountains classification at the Tour de France 2015.

As the commentator rightly repeatedly said the Eritrean people and millions around the world watched the race while Daniel Teklehaimanot took the lead to make history for Africa and mammoth event for the Eritrean people who have been waiting anxiously for such moment.

“On Thursday, blue skies and calm winds greeted a pack eager to take something of a day off from the stressful first week. The major story of the day, until the finish, belonged to Daniel Teklehaimanot of MTN-Qhubeka. The Eritrean rider has been a pro at the sport’s top level for four years, and recently finished third in the Criterium du Dauphiné but this is his first Tour de France. Teklehaimanot and his teammate Merhawi Kudus are the first Eritreans to ride the Tour.”

“And when he jumped in the early breakaway with Europcar’s Perrig Quemeneur and Kenneth Vanbilsen (Cofidis), he set his sights on also becoming the first black African cyclist to wear a TdF leader’s jersey.

He promptly won all three of the minor climbs en route and now leads the King of the Mountains competition by one point over Stage 3 winner Joaquim Rodriguez.”

“As for Teklehaimanot, don’t be surprised to see him attack early again tomorrow. There’s a single Category 4 climb with just one point on offer, but if Teklehaimanot can soak it up he’ll have a strong chance of keeping the climber’s jersey through the rest day on Monday.”

And as predicted by the commentators he did attack early again and will don the the King of the Mountains jersey for the days to come.

A Roar expert, Sean Lee, in his article published in 26 April 2013 “Are Eritreans the next Columbians” said “Those prophetic words, uttered earlier this year by none other than five time Tour de France winner Bernaud Hinault, were in reference to a promising performance by the Eritrean national team at January’s Tropicale Amissa Bongo in Gabon.

The statement came after stage four of the seven day event when the six man squad from Eritrea not only led the African teams’ classification but also had five of its riders in the top twenty overall.
With an increasing number of role models to follow and opportunities opening up, this trickle of African talent into the cycling gene pool could soon become a torrent.

For Daniel to stand on the podium for the first time as a person and as an Eritrean and for that matter as the first black African was a dream come true. According to the interview he gave to the official Tour de France website he dreamed the don the polka-dot jersey ever since his childhood. With regards to his victory of yesterday Daniel said “I am really happy about what happened today. I can’t believe it. That was my childhood dream to get the polka dot jersey at the Tour de France. I was excited about having it even for just one day.”

Daniel Teklehaimanot and Merhawi Kudus are the products of the long cycling history in Eritrea. The history of cycling in Eritrea goes back to the time of the coming of the Italians. It is one of the Eritrea’s lasting influences of the colonial rule. Even though nationals were not allowed to participate, cycling competition began in 1946, what was then called Corso (Competition).

During the colonial rule cycling teams were set up, though dominated by Italians, for both entertainment and sports purposes. It was around 1948 that Eritrean riders began to appear in the competition stages. A team “Africa” comprising of indigenous riders was set up.

Since then cycling races have been one of the favorite sports activities in the country. And within the course of time many renowned Eritrean cyclists began to emerge.

Unfortunately Eritrea was not allowed, in fact denied, to stand on its own as an independent entity and condemned to remain under the yokes of colonialism. And with all the challenges and under the grip of brutal colonialists the cycling sport remained one of the dominant sports in Eritrea. It was at those times that the renowned cyclist like Fesehatsion Gebreyesus, Yemane Negasi, Gebretensae Mehari and Beyene Simon began to emerge to the extent of representing the then Ethiopian colonialism in the All Africa games.

In the 1972 Melbourne Olympics it was Eritrean riders Tsehaye Bahta, Mesfun Tesfay, Fesehatsion Gebreyesys and Yemane Negasi who represented Ethiopia.  That time and ever since Eritrean cyclists dominated the sport. Hence, it is not by accident the cycling has become the favorite sports activity in Eritrea, it was through process.

Immediately after independence, cycling, like any other sports activities, took the attention of the Government and the people and huge investment was made for their development. Cyclist like Yemane Tekeste represented Eritrea in regional and international games waving the Eritrean flag.
The last six-five years, however, are unique in the cycling history of the country. In these years Eritrean cyclists began to dominate the sport in regional and continental levels and began to draw the attention of many in the international level.

In Africa many who have the knowledge of the sport were driven to acclaim that countries like South Africa, Morocco, Egypt, what have you, were the dominant figures in cycling. But today that perception has become a forgone history. And it has been proven by Daniel Teklehaimanot and Merhawi Kudus not only by their participation at the prestigious Tour de France but also by demonstrating their great talent. The victory scored by Daniel yesterday is only the beginning for what the Eritrean cyclists will offer to their people and continent.

Every Eritrean has been delighted beyond explanation. Eritreans were heard congratulating each other with the massive victory of Daniel. Our expectations are more and we are satisfied by what we already got.

I wish many more victories for the Eritrean riders!