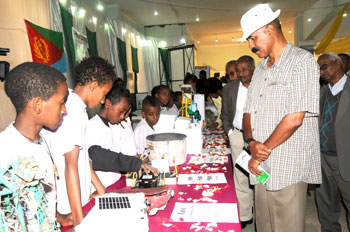 Asmara, July 25 2015 – President Isaias Afwerki today opened Eritrea Festival 2015 at Expo Grounds here in the capital. Present on the occasion were Government and PFDJ officials, heads of National Unions and members of the Diplomatic corp.  The President observed the different sections of the Festival during which he received briefings.

The Festival highlights the endowments of the Administrative regions, development stride, expansion of social services including that of

education, health and infrastructure, in addition to various cultural shows, among others.

The lifestyle of Eritrean ethnic groups, traditional tools, artistic shows and sports contests are among the Festival contents.

Eritrea Festival 2015 remain open to the public until August 2.