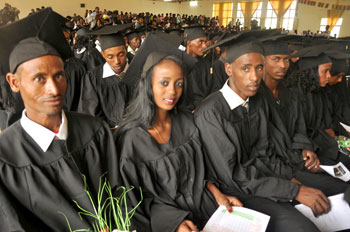 Hamelmalo Agricultural College has been in a week of festivity. It is quite impressive to see that the college celebrated 10th anniversary of its establishment along with the inauguration of a newly built research laboratory. Established in 2005, the college has held its 8th commencement on 19 July 2015.

The college started to offer service with the joining of 475 students who attended their first year education at Eritrea Institute of Technology. The college has now equipped a number of students with professional skills in different agricultural studies. The unremitted effort that continued to be exerted has contributed too much towards achieving food security.

The college has been offering courses in Animal Husbandry, Horticulture, Agronomy, Agricultural Engineering, and Veterinary Science among others.  In the 8th commencement, the college graduated 219 students with degrees, 178 with diplomas and the 13 are with Master Degrees.

The graduation event of the 410 students was held in the presence of Ministers, Government officials, religious leaders, heads of institutions of higher education, and farmers in the environs of the college as well as invited guests.

Mr. Semere Amlesom, Dean of the College, explained the steady progress the college has registered in the past 10 years. To get rid of dependency on expatriate instructors, the college has been sending members of its academic staff for scholarships. The academic staff of the college includes 28 instructors with doctorate degrees, 26 with master degrees while the rest 49 are assistant graduates with bachelors’ degrees.

The 45% of the college’s staff members are females. This proportion is highly indicative of the progress the country has made in educating women.

The college has been educating 50 of its academic staff at Masters’ and Doctorate levels. What is more is that, the college has well equipped its digital library with 50 computers and 20 tablets with an aim of assisting its staff with digital technology.

According to Mr. Semere, a new building complex that is equipped with metrological data collection system, experiment laboratories, classrooms for practical teachings, as well as rooms for poultry has already been ready to offer service.
Strengthening ties with international institutions of higher education in an area which the college has achieved remarkable progress.

So far in the last 10 years of its establishment, the college graduated 2976 students in different fields of agriculture. The skill they have acquired during their stay in the college has been instrumental in easing the challenges in different work areas of the agriculture sector.
Deficit of experts generally in the agriculture sector and particularly in administration of natural resources has now been steadily alleviated with the increasing number of graduates. But, the dean of the college is very keen that the graduates need to be placed in an area of work which they could contribute their level best.  “Last year’s deployment of graduates in the areas of their specialties has born fruitful outcome,” said Dean of the college.

The dean of the college called up on the graduates to implement what they have learned in practical work areas and for the benefit of the people and Government of Eritrea who have hugely invested towards their success, to acknowledge the rich traditional agricultural practices of the Eritrean society and to diligently work on knowledge transfer.

Arefayne Berhne, Minister of Agriculture, said that agriculture is a sector in which the majority of the Eritrean society is engaged in. Taking into account the significance of agricultural produce in the nation’s economy, the government has been highly investing to substitute traditional practices with the introduction of modern agricultural technology in the areas of crop production, animal husbandry, fruits and vegetables among others. The Minister reminded graduates to rank gaining practical skills ahead of everything.

Headed by the Dean of the college, Minister Arefayne inaugurated the newly built Libratory Complex a few minutes after the end of the graduation event. Besides research and experiment facilities, the new building complex includes a hall with 550 seats. A pictorial exhibition that shows research activities of the college carried out towards solving challenges of farmers, and display of trophies which the college earned in sports completions were also staged. Briefings as regards the overall activities of the college were also given by the organizers of the exhibition.

Hamelmalo Agricltural College has, in the period between 2008 and 2015, graduated 35 students with Masters’ degrees, 1264 with first degree and 1677 with diplomas.