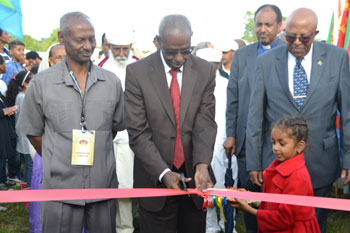 The 17th Eritrea Festival in the Scandinavian countries opened yesterday in a colorful manner.

Asmara, 31 July 2015 – The 17th Eritrea Festival in the Scandinavian countries opened yesterday in a colorful manner.  The Festival was opened by Mr. Yemane Gebreab, Head of Political Affairs at the PFDJ.

In remarks he made at the opening ceremony, Mr. Yonas Mana, Chargé d’affaires at the Eritrean

Embassy in the Scandinavian countries, noted that the Eritrean nationals there hold deep attachment with the Homeland. In the course of the Festival, Mr. Yemane and invited guests made a tour of the different sections and shows displayed.

Performances by a cultural troupe from Eritrea, works of art along with seminars would feature in the Festival that would continue until August 2.