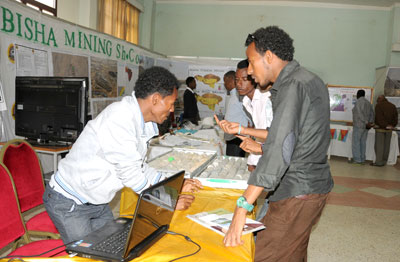 Festival Eritrea – held annually in the first week of August in Asmara (and at times in some major Eritrean cities) – generally offers a wide spectrum of exhibitions.    In this sense, the diversity of the programmes is conducive for accommodating both young and older generations while the traditional dishes and beverages on offer add flavour to the whole setting.

The programmes that caught my attention more were the innovation area and the display of mining companies located at the G3 Expo hall. I was curious to hear more from those companies currently operating in the country and was warmly welcomed by their respective representatives; particularly from Zara Mining Company, another mining company operating in Danakilia, and Andiamo among others.

My curiosity triggered similar interests in several people in the Pavilion who who rushed to the scene to listen attentively to the information given by representatives of the eight companies present during the festival. Questions started flowing especially by the younger ones in the audience.

As we all know, the mining sector in Eritrea is a promising and booming sector of economic development, although it is at its early stage at the moment.  For us in the general public, we of course hear in very broad terms about the rich gold and potash resources contained in the Eritrean soil.   But knowledge on these matters tends to be generic and imprecise with little information on actual magnitude or the complicated processes of the mechanic and dynamics exploiting the resources.   Discussion with some of these professionals was indeed an eye-opener for me helping to realize the whole process prior to the start of mineralization.

“People only think of Bisha; but we want to show the multiple resources we have throughout the country and not just in Bisha area. – Michael Eyob, Zara mining company.

In reality, when people talk about mining in Eritrea; the first thing, which comes to everyone’s mind, is Bisha Mining Company.  Yet, although Bisha was the first and leading company operating in Eritrea, there are other companies at various stages of the mineral extraction continuum on the Eritrean market.   Zara mining company is one of these companies and I had the pleasure to hold an interesting discussion with Mr. Michael Eyob, one of its representatives who actually works in the processing plant currently under construction.

Zara mining company is a shared corporation between China (60%) and Eritrea (40%). It is scheduled to start production in September 2015 after 6 years of prospecting and exploration in its licensed area in the Gash Barka region;  located about 400km northwest of Asmara. The company will extract and process gold, almost 100% refined I am told, from its operations.

The project congestion period is quite long consisting, as it does, of desk research and prospecting, exploration and assessment of the expected reserve prior to actual production.   The Government pursues a three-staged regulatory framework that consists of legal permits for prospecting, exploration and finally production or exploitation under a Mining Agreement.   In fact, as Eritrea is at its early stage of development of the mining sector, the exploration and assessment processes may take 5 – 10 years before operating. The companies explained this aspect to in greater detail with some interactive maps and representations.  Mr. Yemane Kifle, who works as a community programme manager for Asmara Mining Share Company gave us much insight of the procedures involved.  Asmara Share Company has long acquired the license for prospecting and exploration in a wide area in the environs of the capital encompassing Emba Derho, Adi Nefas as well as  Debarwa, for copper, zinc and gold deposits.

Similarly, the Danakali company, formerly known as South Boulders, focuses on the development of the Colluli Potash project in the Danakil region of Eritrea. This share company owns the colluli potash project, which is a 50:50 joint venture arrangement between Danakali Limited and the Eritrean National Mining Company (ENAMCO).  It started exploration in 2009 and is now in the licensing process to start actual production. I noticed that many people did not necessarily know about this specific company and especially what potash is. In fact, potash is one of the most prosperous areas of mining for Eritrea. Mr. Tewelde Hadgu, a biologist working in the environment sector of the enterprise, explained to us that potash is a term used for potassium bearing minerals primarily used as fertilizers. It is, thus, an important ingredient in food production necessary for healthy soil and plant growth. Besides, there is no substitute for potash. Furthermore, the exploration area covers more than 200 km2 in which about 1.3 billion tones of potassium bearing salts are present.  What makes it unique in Eritrea? I was fascinated to see the comparison tables made available at the stand describing the benefits that accrue from this particular mining production.  The location is only 75km inland from the Red Sea coast line.  This renders transport-related costs to be lower than average.  In addition,  the operations is slated to have one of the lowest capital intensity ventures  as well as operating costs while having a variety of potassium-bearing salts at only 16m to 150m depth compared to 1000m in other parts of the world.

How about the local communities?

When I was listening to all the promising dividends from the mining sector, one question that came up to my mind was the spin off to local communities? Does this entail tangible impact to local communities?  Some of the companies (Andiamo, Danakali) operate in remote, uninhabited areas and do not have to grapple with these challenges. Others, such as Bisha mining company, operate in localities where there are resident communities.   In this respect, the companies abide by strict government/corporate policies of environmental preservation and implement certain guidelines that entail benefits to the local communities. and environment-friendly attitude are taken into consideration. I asked Mr. Yemane Kifle for specifics in regard to these issues.  He used interactive maps of the exploring sites to demonstrate the multiple activities implemented to include the community and to protect their livelihood.  In fact, what I witnessed during my visit at the Expo Hall was that all companies focus on integrating local communities during the whole process from prospecting, exploration, to actual production.  To strengthen this commitment, companies organized meetings with local communities and discussed the needs and future plans ahead. For instance, companies are obliged to give priorities to local population in terms of employment opportunities and also to provide training.  Furthermore, if any part of the village land falls under the exploration sites, compensation or agricultural assistance are provided.  These may also include machinery and/or training on labor-intensive production.

Robust environmental protection programme is an imperative for companies in order to acquire their license to operate.  Similar regulations apply in regard to ensuring the safety and well being of employees. In fact, as Feven Tsegay, a young geologist working for Zara mining company explained,  the infrastructure and care towards employees meet international standards.   All staff work for one month and then enjoy two weeks off. It is clear that the mining sector is booming and the prospects for the coming years will create employment and raise the amount of expertise of Eritrean nationals where already many have worked on a rotation basis with several companies.

Despite climate-related challenges  – as Haliot Asmellash and Biniam Ghirmai explained – and although road access to some of the sites remains difficult, the main obstacle in the period ahead might be the negative narrative peddled by  mainstream media.   This has not had any impact so far.  But foreign companies could face difficulties in raising finance.  Whether this concern is hypothetical and speculative or real is difficult to tell and we can only wait to see how things pan out.

Sights and Sounds from the Hub of Harmony