Sights and Sounds from the Hub of Harmony 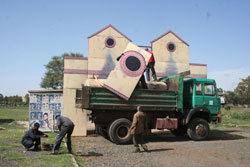 With about 800,000 population, 231 administrative areas and 1018 villages, the Southern Region is one of the six regions that have been actively engaged in familiarizing their content in this year’s festival. And as part of this, with the theme ‘Equal Opportunities for All’, this region has opened a golden opportunity for the hearing-impaired citizens.

Highly supported by a young sign-interpreter, Yonas Musa, coordinators of the Southern Region pavilion have been introducing visitors to the region’s panoptic developmental endeavors and other ventures. “Of course, those who are challenged with hearing potencies have been getting the right explanation about the all-round progresses of the region,” Yonas asserts. He adds that like these exemplary initiatives need to be further promoted so as to enhance such positive influences.

Reports indicate that promoting the sign language have been in application for long now, creating conducive grounds for those who are living in far-flung areas. An insignificant number of volunteers, limited nationwide researches about the prevalence of such hearing-related impairment challenges, among others, have been the critical impediments of the National Association for Hearing-Impaired citizens.

In the pavilion of the Gash Barka Region, aka Eritrea’s breadbasket and one of the mostly diversified and ethnographically rich regions of the country, visitors have been witnessing the region’s developmental efforts, which are exceedingly vital for driving the cycle of transformation. Henceforth, in addition to the on-going efforts for minimizing challenges of the region in providing mobile telephone services, endeavors are also underway for constructing 10 additional stations.

In addition to the aforementioned changes in the livelihood of the society, the regions boasts of 259 kms of asphalted roads and 1,834 kms of gravel roads, all functioning properly. And 41 big, 1,158 medium and small and 92 ford bridges have also remained purposeful in catalyzing such positive impacts of the region’s residents.

In other way, as education has vital part in ensuring cultural emancipations, the Gash-Barka Region has been well beneficial from such policies. Therefore, a total of 398 schools have been built in the region, resulting in the increase of the number of students attending school. In this year’s festival, therefore, visitors have been faced with an opportunity to knowing a region that is home to 716, 900 residents.

Among the appealing offers for Expo visitors this year is an agricultural product designed to improvise the cultural and diurnal dishes of our society: sweet-potato. Resultantly, a number of visitors have been expressing amazement for familiarizing themselves with this new product.

This famous major East African staple food has yet been unfamiliar to Eritreans. As the purpose and benefit of this potato is highly rewarding and multi-purposeful, the Ministry of Agriculture imported 19 types of this potato and held a 5-year non-stop intensive research at Halhale Institute. The Ministry subsequently selected five types for consumption.

Even though there have been sensitization campaigns and some farmers have adopted farming and providing sweet potatoes to markets, unfortunately there is still diminished knowledge of the society, and the efforts haven’t been that satisfactory. Dubaruwa and Mendefera are the main hubs of this unique agricultural production.

Experts have validated that sweet-potatoes can be useful in various manners as you are offered with golden opportunities to produce marmalades, French-fries, crisps, biscuits, cakes, juice, bread and other consumables. This sweet-potato has been the king of over 19 dishes, which according to the experts, are dominantly favorable in countries like Uganda, Congo, Kenya, Burundi, Rwanda and Tanzania as it is also renowned in Latin American countries like Guatemala, Colombia, Ecuador and Northern Peru and other countries.

Experts of this field who have been introducing this potato for visitors at the festival have called on traders and other respective bodies to play a vital role in familiarizing this peculiar potato for customers. Colleges, health-centers, hotels and other work stations are those expected to benefit highly from such offers which are very affordable and profitable.

As part of the 2015 National Festival programs at the Expo Ground here in Asmara, the Eritrean Film Rating Committee held a three-day seminars on various issues. On Thursday, Rahel Asgedom presented her research in regard to our country’s films and their storylines. This seminar is expected to conclude its deliberations on various issues today at Bologna club by investigating issues on art and design, and, unflinchingly, the role of cultivating the culture of readership in producing creative films. During the course of the seminar, participants held discussions in regard to Eritrean Film Rating Committee, our films and the performance of actors, impacts of films on diurnal life of the society, producing films in Eritrea and their challenges.

Participants of the 2015 National Festival recommended such researches to be held in ways that are synchronized with our realistic challenges and opportunities rather than suggesting for the art society about other developed countries’ experiences in suffocating way. Except this, very restricting schedules have also been dragging participants from holding in-depth deliberations, which, as I recommend personally, had narrowed such rare opportunity for discussing on how to foster our films.

“A writer should live for a cause” Habtom Kidane