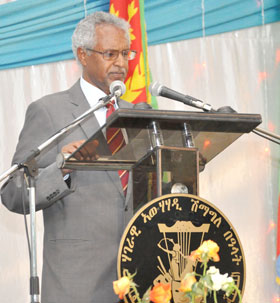 The week-long Eritrea Festival 2015 at the Expo Ground here in the capital concluded yesterday.

Asmara, 3 August 2015 – The week-long Eritrea Festival 2015 at the Expo Ground here in the capital concluded yesterday.

The Administrative regions, organizations and individuals that demonstrated excellence at the Festival received awards during the closing session in which senior government and Front officials,representatives of National Associations and invited guests took part.

The event conducted under the theme “Festival: Hub of Harmony” witnessed shows highlighting the existing resources in the different regions(Zobas), the development stride they had registered, social and educational services, including impressive health care and development in infrastructure, among others.

In remarks he made at the closing ceremony, Ambassador Zemede Tekle, Minister of Culture and Sport, said that encouraging progress was witnessed at this year’s Festival and that the future holds bright prospects.

The Minister of Labor and Human Welfare, Mr. Kahsai Gebrehiwet, handed prizes to the Regional administrations, institutions and individuals that registered excellence at the Festival.