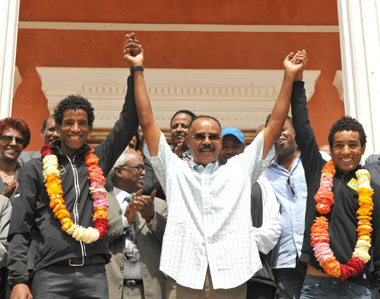 Asmara residents and nationals from the city’s environs turned up in their tens of thousands to give rousing welcome to the victorious cyclists. The welcoming ceremony took place from Asmara International Airport to Bahti Meskerem Square accompanied by March band, along with nationals of all ages swarming the city streets coupled with warm applause. The ceremony was broadcast live on ERI-TV and Dimtsi Hafash.

Following the enthusiastic welcoming ceremony at Bahti Meskerem Square, President Isaias Afwerki received the hero cyclists at State House and congratulated them on behalf of the people and Government of Eritrea. He pointed out that the brilliant victory scored by the Eritrean cyclists at Tour de France attests to the existing cycling and latent potential for excellence in other fields in Eritrea. In the course of the ceremony, the meritorious cyclist Daniel presented to President Isaias the polka-dot jersey he don as the King of the Mountains for four consecutive days in course of the tour.

Ambassador Zemede Tekle, Commissioner of Sports and Culture, noted on his part that the victory scored by Daniel and Merhawi constitutes a pride to all Eritreans.

It is to be recalled that cyclist Daniel Teklehaimanot recorded a new history in the 6th stage of Tour de France by being the first Eritrean and first African to ride the Tour and win the King of Mountains jersey. He demonstrated higher spirit of competitiveness in the 191.5 Km.-long race escaping over 80% of the competition amid broad media coverage worldwide.

He also retained the polka-dot jersey in the 7th stage competition.