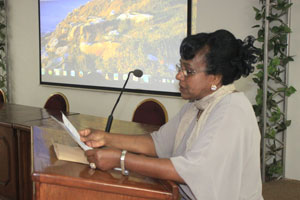 The Ministry of Health held a conference on the draft national policy regarding traditional medicine.

Asmara, 5 August 2015 – The Ministry of Health held a conference on the draft national policy regarding traditional medicine. Representatives of different government institutions, the WHO and nationals who practice traditional methods of treatment participated in the conference which was held at Orotta Referral Hospital in Asmara.

Speaking at the conference, the Minister of Health, Ms. Amina Nurhusein, stated that the Ministry has been working with partners on ways and means of applying traditional medicine as part and parcel of the endeavours to expand effective health services to the general public.  In this regard, a draft policy has already been charted out in order to strengthen the delivery of broad health services to the community, the Minister elaborated.