The City in the Clouds Where No Eve Dwells 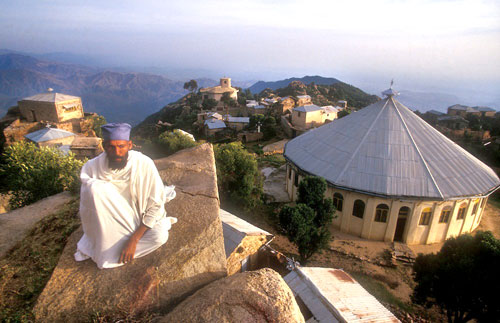 Yesterday August 11 was a religious holiday marked by an uphill excursion to the top of Mount Bizen where the ancient Bizen Monastery (Debre Bizen) lies like a crow’s nest.

The only way for visitors to make the not-so-easy steep slopes to the top is on foot but the reward for those who endure that grueling climb is a spectacular view of the surrounding barren mountains.

The starting point for the 2 hour trek up the mountains to the famous 600 years old Debre Bizen is the town of Nefasit, found 25km down the hair-pin bends of the Asmara-Massawa road.

The Bizen Monastery is the most prominent beacon and symbol of Christianity in Eritrea, where many saints and explorers (including the famous 16th century Spanish adventurer Alvarez) have been buried.

Debre Bizen was founded by  His Holiness Abune Philipos in 1361 AD. Legend and history enfolds this monastery, which sits perched on a mountain at a pinnacle of 2450 meters above sea level. One of the legends has it that due to the sheer holiness Abune Philipos, three cripples were allegedly cured by his shadow only.

His teacher, Abune Tatyos, is also the subject of legend. During his evangelical journey

eastwards, he asked a captain to take him across the Red Sea. The captain asked for money, Tatyos therefore resorted to sitting on his cloak, which bore him up like a magic carpet and flew him across the seas and deserts to Armenia. He supposedly launched himself from a rocky ledge, north of the monastery, called Adey Kbetsni, (Goodbye My Mother). It is claimed that the gnarled tree that stands on the wind-blown rock today is one that bowed down to the pious monk as he prepared to launch himself into the skies. Behind the outcrop, Adey Kbetsni, is a tomb dedicated to Abune Yohannes, an abbot of the monastery who lived
five hundred years ago.

One aspect for which this monastery is well known is its strict observation of rules and regulations, including the exclusion of women. A large cross along the steep path marks the point at which women must stop and proceed no further. This rule is taken to great lengths, and not even female animals are allowed near, meaning only mules and male donkeys are used as pack animals. Abune Philipos founded the Monastery to protect his monks from “the temptation of women”. Legend has it that Abune Philipos moved the Coptic religious community up the mountains from Nefasit because he preferred the roar of lions – which at that time inhabited the wild mountains – to the distraction of women. He is reported to have said that he would “rather stare into the face of a lion than into the eyes of a woman.”

Another fascinating history of Debre Bizen is that it has devised its own calendar, invented by a certain monk called Gebremeskel and known as Hasabe Bizen (The Thinking of Bizen). It has 35 columns and Hebrew and Christian calendars as basis. The dating started from the creation of the earth and ended at the year 1500 AD, because the inventor somehow believed that doomsday would come in that year. The calendar has not been used ever since then. But had it been in use, according to Bizen Calendar or ‘The Thinking of Bizen’ today we would be nearing the end of the 18th  century.

The monastery is a collection of pink granite buildings cut into the sides of huge smooth rocks.

The oldest building is the church built during lifetime of monk Philipos, on top of the roof is an intricate  Orthodox crucifix and circle of bells, which jangle in the breeze. The walls of the church are painted yellow with decorated wooden shutters and doors. For centuries, it has survived as a centre of Christian prayer and learning in spite of invading armies and religious conflict from that of Somali hordes of Ahmed Gragn to the Derg. In the compound are species of African olives that look very similar to the European and Middle Eastern kind cultivated for oil export but they are species growing quite wild.

To the east is the modern church and adjoining it is the monastery’s museum, home to some 1,000 ancient manuscripts for which Debre Bizen, is justifiably famous. Several dozen fine illuminated sheepskin parchments bound in thick leather, embroidered ecclesiastical robes, hand carved and hand painted ceremonial crosses and other artifacts are stacked in this archive.

Some of the manuscripts include the most extraordinary Bible dating back the 14th century, to the time of Philipos. Another exquisite manuscript is the lost biblical Book of Enoch, and a third the story of Abune Libanos, a great churchman who traveled from Lebanon and found the monastery of Debre Libanos in Eritrea’s southern highlands. The manuscripts are examples of the finest medieval workmanship, meticulously written in the liturgical language of Ge’ez in red or black inks with elaborate illuminations. A bell is rung whenever a manuscript is removed from the library, which is rare because monks tend to read on the spot.

The monks live in an egalitarian  society, wearing the same clothes and eating the same food regardless of their rank. They live solely by cultivating the surrounding fields and survive on rainwater collected off the guttering of the roofs, nowadays using solar power cells to generate electricity to run their light bulbs. They dedicate their lives (as they have always done since the founding of the monastery) to teaching and expanding the preaching of love and brotherhood. They also offer a charitable refuge for handicapped, old and destitute men. Hundreds of old, blind and handicapped people have come to the monastery to receive food, shelter and clothing and to live their remaining days in a life of spirituality.

The blackened interior of the monastery’s kitchen is an impressive place, containing vast copper pots large enough to cook three cattle at once. And indeed a huge amount of cooking is done during the festival at the monastery. A drink made of sorghum is also brewed for

these occasions in a stone congress hall next to the kitchen. In another neighborhood hall is a large timber used as stocks for punishing wrongdoers in the monastery.

Pilgrims and visitors are housed in a guesthouse with arched doors. Outside is a trough carved out of a huge stone, which the monks claim was carried on the back of one of Philipos` pupils. Today it is used for bread-making.

Practically, reality combined with piety, myth with mystery make Debre Bizen a unique religious retreat. And as one gazes across the crumpled folds of craggy mountain monastery, it is not difficult to believe that it will continue to survive unscathed for many more centuries.

Louis Werner, a documentary film-maker who travels frequently to the Middle East, described the monastery as “sky top village” and as “conviviality in the sky” in his article Welcome to Heaven: A 650-Year-Old Eritrean Monastery in the Clouds.

The monastery commands magnificent views of the surrounding hills and all the way down to the line of the Red Sea coast. The atmosphere of the settlement, surrounded by a grove of rare indigenous trees, is pious and medieval, other-worldly and even magical. At dawn, a carpet of glistening white cloud often hides the earth below where the village of Nefasit with its yellow and green-domed mosques and a Coptic church nestles at the base of the mountain. In daytime, the air is cool, there are birds singing and green grass grows between the monastery buildings. And at night, the lights of Massawa sparkle in the distance.The views to the sea and Dahlak Islands, to the Buri Peninsula and the Gulf of Zula, and to the southern mountains, are the most impressive in Eritrea.

The history of Debre Bizen, combined with the collection of artifacts and the heavenly experience in the monastery, proves a potential attraction for tourists. As such, Debre Bizen needs to be preserved as the custodian of the many treasures of Eritrea’s Christian past, and consequently part of  the Christian heritage of Eritrea and the world.

(Additional information was adapted from various sources into the original article.)

“The Stage is my Comfort Zone”