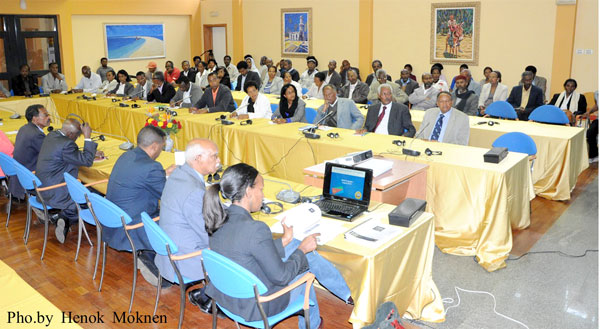 The National Confederation of Eritrean Workers (NECW) and the International Trade Union Confederation (ITUC) held a consultative meeting in Asmara on 17th August at the headquarters of the NECW this week.

National Confederation of Eritrean Workers (NECW) and the International Trade Union Confederation (ITUC) held a consultative meeting in Asmara on 17th August at the headquarters of the NECW this week.  The principal aim of the meeting was to explore ways and means for strengthening the ties between the two organizations.

The Secretary General of the NCEW, Mr. Tekheste Baire, pointed out that the National Confederation of Eritrean Workers remains an ardent supporter of the aims and objectives of the ITUC.  This is amply demonstrated by the NECW’s active participation in all forums of ITUC and its extension of unreserved support to the organization in various areas.  Mr. Tekheste intimated that this was not always reciprocated by the ITUC whose stance was particularly unhelpful and ambivalent on the critical sovereignty issue that are of paramount importance to Eritrean and the NCEW

The Deputy General Secretary of the ITUC, Mr. Wellington Chibebe, commended Eritrea’s role in strengthening the Union.   Mr. Chibebe, who described his visit to Eritrea as a vital opportunity to obtain first-hand information on the realities in the country, expressed satisfaction at the frank discussions his delegation was able to conduct with counterparts in the country and at the various activities of the NCEW that he was able to observe.

The ITUC delegation, which also included the Secretary General of ITUC-Africa Region, Mr. Kwasi Adu-Amankwah, held subsequent meetings with the Executive Committee of the NCEW, leaders of various other national associations, and representatives of trade unions in the country.

NCEW formally acceded to ITUC in 1994 after the country’s independence, while it had observer status in the years of the armed struggle.