Sheer Greetings & Hospitality: The God Given 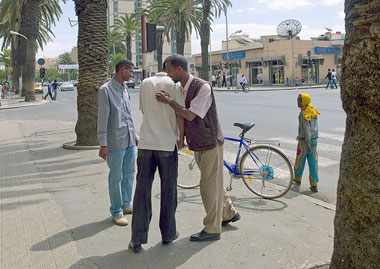 A friend storms in saying ‘what kind of a person is x, all this time I thought he was a nice guy!’ You would wonder what mister x did so wrong to anger your friend in that manner and ask ‘what did he do to you?’ Your friend would reply, ‘we have known each other for a long time and he doesn’t greet me well’. And if you are not familiar with the Eritrean way of life, you may find yourself taken aback by this.

Because life is communal, relationships are personal, social en¬counters are there fore intimate. When one greets the other, it is supposed to be deep and heart felt. Mere shuffling of ‘hi’ or ‘hello’ won’t work. Every one is expected to know who is who and respect the family bond that one has. And when bumping to acquaintances, one is expected to give a warm and elaborate greeting, showing deep inter¬est in that person and letting them know that he cares. And failing to do so is socially frowned upon, and at times seen as deviant behavior.

A person is said to be nice and breezy according to the kind of greeting he gives other people. A person’s place in the society or community is underlined by his habit of greeting. Because relationships are at personal basis, that person is sup¬posed to take interest in the well being of the person he’s meeting and his family. And if he fails to do so, if he fails to greet someone warmly, he is taken for a self-centered and ‘I don’t need any body’ kind of a guy.

So often, people size you up on the basis of your ‘hello habits.’ If you were a little distant from what is normal, i.e., not sharing a long and elaborate greeting or enquiring about the well being of family members upon meeting someone, you would be giving a wrong image of yourself to others. And however nice you may be, people would have a low opinion of you, and remark ‘he doesn’t even satisfy you with his greeting.’ It is like what good you can do, if you can’t even manage to do the simplest and effortless thing like greeting someone.

There was this comedy about a teenager and a much older relative of his. As the story goes, the teen-age boy was smoking unbeknown to his parents, and the relative happened to pass by the place the boy was at and stops to greet him. Frustrated by the sudden mishap, the boy hides the burning cigarette in the pocket of his trousers in time to reciprocate the greeting to his relative.

They shake hands and bump their shoulders and the older man starts to enquire after the boy’s health, education, and asks about the well being of the family members, referring to everyone by their names.

In short, the greeting takes more time than it should, and the lit cigarette that the boy tucked in his pockets burns his cloths and reaches all through to his skin. And at the end the boy makes quite a scene, to the shock of his relative, by screaming ‘we are all fine!’ out of sharp pain.

Giving a proper greeting could sometimes be problematic, especially when people are in a hurry. Because it means that if you are rushing to do things on time, you have to throw a simple hello and run to your affairs. Nevertheless, in our lives, greetings is not just saying hello at some encounter; it is a way of reciprocating the care of others over you. It is a way of saying I am here and I care.

More over, for Eritreans, a greeting is a God given right of people. One doesn’t pay for it, doesn’t toil for it. There is a belief that God has given us the concept of greeting, so that we learn to be nice to each other and hence spread the spirit of peace and harmony. Especially in the countryside, not greeting the passersby, even if they are perfect strangers, is seen as an act of such indecency. If you happen to ask why, because ‘selamta (greeting) is of God’s’, would be the answer you get from a typical Eritrean.

Along with greetings, Eritreans are also known for their hospitality. As flattering as it may sound it is also an everyday happening.

As a stranger crosses the border of his own environment to the life circle of an Eritrean soul, merhaba would be the first word you would hear. And most likely, it is probably the first Eritrean word whose meaning you would find out the earliest.

Merhaba as a word is so common among the Eritrean ethnic groups; it is often hard to recognize the word’s root language. It is like Amen, which everybody says and knows what it means but nobody cares to find out where exactly it came from.

Highlander or lowlander, Christian or Muslim, everybody welcomes a guest with a worm merhaba; meaning ‘you are welcome in my house’. It is widely believed that guests are a blessing to have because it’s utterly satisfying to welcome and accommodate guests.
Sometimes it is highly inter¬twined with the host’s faith, as Eritreans are religious people. At the sight of a new face, the household member will welcome you warmly. One doesn’t even care whether the guest is where he intends to be. So even if the guest is in a wrong place, he is still accorded a warm welcome and proper guest accommodations, beginning with the warm water to wash the feet (especially in the villages), to the beautiful coffee ceremony.
Very often, the guest realizes he is in the wrong house only a little later because unless he asks first, it would be highly improbable for the host to start enquiring. This is so, because it is considered rude to ask people, who they are or what they want, when they come to your home.

There is a saying that goes, beal hade mealti aykseska, equivalent to ‘first impression is the last impression’. So being an Eritrean the last thing you want to give a guest is the wrong impression.

And at times, even if you don’t have enough for yourself, you give plenty to the guest, under the spell of thinking that because he doesn’t know you, if he is underserved, he will forever hold a bad judgment upon you.

So this hospitality, at the other extreme of it, doesn’t consider the reality. Because, the household, even if it doesn’t have much, may offer whatever it possesses to you, leaving the children and other members of the house hungry.

And because the guest is there only for one day, he is treated with the best dishes the household can afford. It may be that the children always eat the tea and dry bread for breakfast, and the eggs are always for sale to help in the economy of the house. But when a guest is there, his breakfast doesn’t run out of a nice plate of fried eggs.

Nevertheless, even though the hospitality might at times come with its disadvantages; Eritreans would never abandon it. For what it is worth, Eritreans would continue to utter Merhaba with a charming smile at the sight of new face at their doorstep.