“I have never wept like that even in my childhood” 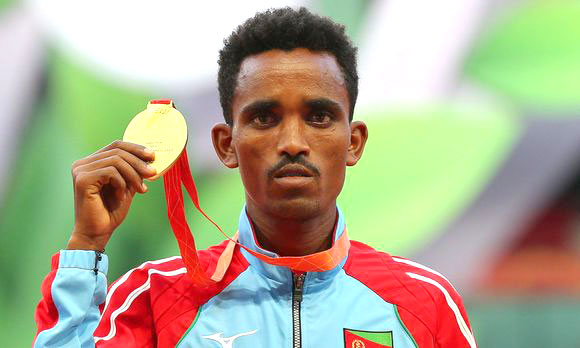 Last Saturday, 16 August 2015, Eritrea got its first Marathon gold medal at the Beijing World Championship 2015 through the young athlete Girmai Gebreslassie. Here is what he has to say about his outstanding victory.

-Athlete Girmai, I would like first to congratulate you on your victory. The gold medal is first of its kind to Eritrea. Tell us about the completion.

The victory is for us Eritreans together. I could come to this point without the support of the Eritrean people in general and the sports community in particular.

Before our arrival in Beijing I hear about the air pollution of the city. Frankly I was a little bit worried because the city was covered with dust and that would hinder me from realizing my dream. But when we arrived and when we were conducting our evening training I felt I was physically and mentally fit.

I am new to Marathon competitions. My first experience has been at Dubai. In that competition I could not even finish the race. I stopped in between. But later in Hamburg, Germany, I registered the minimum requirement that could allow me participate in this World Championship in Beijing. And I am very glad to win such a prestigious Gold Medal.

When I came to this competition my first reaction has been to work hard and stand among the good world competitors. But later when we arrived in Beijing I made myself think that I could be a winner of a medal of some kind. The Gold Medal was not in my mind because there were well experienced marathonists especially in East Africa.

When we started racing my body condition told me that I could do something good. I decided to preserve my energy as much as possible and take the advantage. We went together as a group for about 25 kilometers. From that kilometer, I decided to take my own measure. I sprinted living the tow athletes behind. They tried to respond but they could not catch me. And that sprint finally worked and I became the first young Marathon finalist in the world and I brought, thanks God, the first Gold Medal to my country.

-How did you feel then?

Extreme joy beyond imagination! I have never wept like that even in my childhood. Especially when I observed some Eritreans at the stadium waving our flag in joy that was the moment in which I could not control my emotion. I went straight to the Eritrean crowd, I grabbed the flag from the Eritrean sports journalist, Tesfaldet Mebrahtu, and I entered the finishing line waving my flag. That was for me the day I will never forget in my life. The feeling the photo will be eternal memories for me.

This victory will be a motivational factor for me to repeat it at the Rio de Janeiro Olympics. The mental preparation for that competition will be huge and this victory shoulders me huge responsibility. I know my country men will expect me to do more in every world class competitions. And I hope I will do my capacity to bring to our country more medals with my colleagues.

I am still young with 19 years of age. That means I have good prospect to do more.

Thank you for your enormous support.