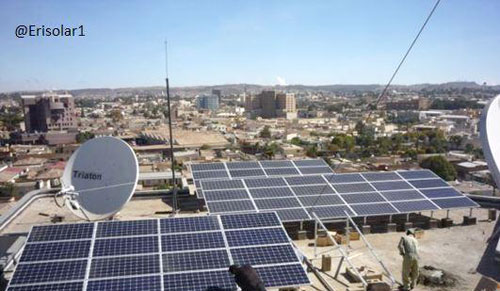 Deep thoughts while I am chilling out on the terrace of Gurgusum beach, in Massawa, and looking at the kids playing in the water under this sun, which hits you already at 7 in the  morning.  Here I am, talkingwith my friends, who are engineers and working on installing solar power in the port city.

All I knew about solar energy is that we have plenty of sunshine in Eritrea and that it could be our main source of electricity supply. As I bombarded my friends with lots of questions on solar energy – hoping from capital expenditure costs to local operational know-how of the technology – I became more interested in looking at our current consumption, the latent potential, and, where we are now compared to the rest of Sub-Saharan Africa.  The vast continent, which could be self sufficient in energy,still remains the least developed one. With a growing population accounting for about 13% of the world’s population, only 4% of its energy demand is met (OECD; IEA, 2014) through the combination of all power generating methods.

Back in Asmara with plenty of ideas from those discussions… I thought, why not do some research on this subject for my regular column on Profile.  Indeed, I suspect that many of you do not have a clear idea or probably do not know where to get information on this renewable energy.  I realized how solar power, as a green energy, is key to tackle growing demand in power supply. It is also safer and durable. The Energy Research and Training Centre of the Ministry of Energy and Mines collected data on solar radiation maps, which show the multitude potential of solar power in responding to the needs of households and businesses.

Have you ever thought about how much money and energy we spend in Eritrea on lighting and electricity related activities such as cooking? Well, compared to Africa’s average, Eritrea is still consuming less on a per capita basis. However, the method used in getting lighting or electricity has economic, environmental and health-related effects. In Eritrea, most households and even businesses depend heavily on biomass as a source of energy such as charcoal, fuel wood and back-up generators.  Available statistics illustrates that each household consumes about three candles per day and 5.8 liters of kerosene a day (UNEP, Feb 2013). These numbers may look tiny and insignificant in relative terms.  Still the cumulative impact at the national level both in terms of aggregate economic expenditure and environmental and health- related issues cannot be underrated.

According to the off-grid lighting assessment conducted by the UN Environment Program (UNEP), a full transition to energy efficient, off-grid, lighting in Eritrea would result in saving 33 million candles, 67 million liters of kerosene and 12 million batteries per year.  This is equivalent to 83.3 million USD in annual savings in monetary terms and 0.5 million barrels of crude oil energy (UNEP, Feb. 2013) in fossil
fuel demand dimensions.

In environmental terms, this is tantamount to about 182.9 thousands tones of carbon dioxide emissions reductions annually.  Churn out the numbers more and this becomes equivalent to 45.7 thousand of mid-size cars being off the road. Also, each household could save up to 86 USD per year and reduce or eliminate fuel-related health issues, fire hazards and toxic fumes (UNEP, Feb. 2013).

The use of biomass as a source of energy has its negative impacts in both the economy and the environment while remaining solely a short-term solution. Unfortunately, most countries in Sub-Saharan Africa depend heavily on this resource.  Africa is supposedly the richest continent in terms of resources.  But the sad reality is that it is lagging far behind and remains the poorest on energy supply. In today’s Africa, about 620 million people live without electricity while 730 million use hazardous, inefficient and unsafe ways of cooking according to the Africa Energy Outlook report (OECD; IEA, 2014).

In Eritrea, average access to electricity these days remains low and erratic particularly due to problems related to maintenance cycles of the main, interconnected, power plants.   Increased use, even as a stop-gap measure, of charcoal or fuel wood, will only accelerates deforestation with the added side effects of toxic fumes especially on women and children. As the war on natural resources is rising on the planet, others are looking at safer and durable ways. One of them is solar energy. As I said earlier, there is a great potential on solar power in many parts of the world and Eritrea is one of them.

There are about five companies on solar energy operating in Eritrea working hand-in-hand with the Ministry of Energy and Mines. There is a growing demand by both households and businesses to shift their electricity supply towards this renewable energy. Already, in 2013, the UN office in Asmara installed 104 solar modules on the roof of its building, producing a total of 15.5 kilowatts of electricity (UNDP 2013). The awareness on the potential of renewable energy is gaining in popularity. Without a doubt, the use of renewable energy such as solar power is, evidently, the most feasible one in Eritrea due to the high amount of sunlight. In number, the country receives about 7.5 – 8 kWh of solar energy per square meter daily and it is perceived as being amongst the sunniest in the world (GeoSolar, 2015).

The different types of solar energy such as photovoltaic (PV), concentrated photovoltaic (CPV) or concentrated solar power (CSP) are all forms, which could respond to the demand of both households and businesses (especially in farming and agriculture). The great opportunity on solar energy cannot be ignored as once installed, the materials could last more than 25 years. It is clearly a great investment, as it becomes a free source of electricity and without any effects on the environment and health.

If Eritrea invests on solar energy on a big scale – and I am informed that initial steps are being undertaken towards that end – it will be at the forefront in the continental discourse on alternative green energies. Some statistical projections on Africa (OECD; IEA, 2014) are discouraging as they point to higher figures of people without access to electricity – from the current number of 290 million out of 915 million – as population growth outstrips economic growth. Moreover, wrong policy choices are bound to undermine Africa’s potential on renewable energy Furthermore, in some areas, 2 USD out of 3 USD is invested in exporting renewable energy (OECD; IEA, 2014). This reminds me of Thomas F. Homer-Dixon’s words in his academic article titled Environmental Scarcity and Mass Violence: “It is easy for the billion odd people living in rich countries to forget that the wellbeing of about half of the world’s population of 5.8 billion remains directly tied to local natural resources” (1996:205).

Many lament the uneven share of natural resources and access to energy supply with more than 40% of people on the planet using fuel wood, charcoal, straw or cow dung as major source of energy (Homer-Dixon, 1996:205). The asymmetrical share of wealth in Sub-Saharan Africa, the destruction of land, fishing and water scarcities are preoccupying trends that require serious appraisal by policy-makers and all stakeholders.  In this perspective, long-term investment on renewable energy in Eritrea must remain a policy priority that can address critical issues and optimize the country’s great comparative advantage.

My brief research and encounters with various interlocutors was refreshing in this regard.  Thomas, the manager at EriSun, stressed to me how critical investment in renewable energy is on overall development.  I have learned that the approach is also comprehensive and integrated, incorporating as it does, installation of solar powers, the construction of hydropower dams, and the prospects for geothermal steam as well as farming wind energy.  Robel, a friend and one of the engineers involved in the field, summed this up aptly: “what is important is that although the energy consumption  in Eritrea remains low compared to  other countries… we need to think of a greener way by avoiding cutting trees and using imported oil… The question is not about us but about the next generation and what we have left for them’.

The website of GeoSolar (2015) reads: “If Eritrea makes a massive switch from oil power plants to solar and other renewable sources, it is possible that 100% of Eritrea’s electricity could be from renewable  energy by 2050”.

‘So let the sun shine everyday…’

“I have never wept like that even in my childhood”