PFDJ Issues statement on the Occasion of September 1st. 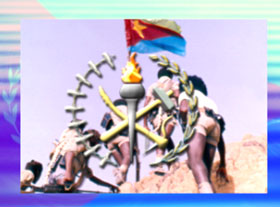 The PFDJ has issued a statement on the commemoration of the 54th anniversary of the beginning of Eritrea’s armed struggle for liberation and human dignity.

Asmara, 01 September 2015 – The PFDJ has issued a statement on the commemoration of the 54th anniversary of the beginning of Eritrea’s armed struggle for liberation and human dignity.

The statement elucidates that the people of Eritrea were compelled to take up arms to assert their inalienable national and human rights when the vigorous legal, peaceful and political protests that they conducted in the 1940s and 1950s were callously shunned by the international community.

The values of social justice and human dignity that were nurtured during the long decades of armed struggle have not only enabled the Eritrean people to vanquish occupation and achieve Independence but they also remain pivotal in inspiring the new generation to work  with utmost dedication to lay the foundations of a civilized and modern nation.  The statement emphasizes that the popular mind-set nurtured during the arduous armed struggle remains the key ingredient for the attributes of Independent Eritrea that are anchored on independent political choice, human dignity, social justice and self-less dedication towards national progress and development.