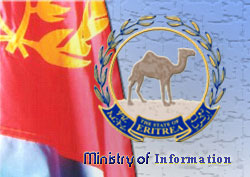 Events that have unfolded in our region in the past few months have aroused anxiety and preoccupation in the TPLF regime and its sponsors.

For so many years in the past, Eritrea’s detractors have waged dogged disinformation campaigns through the daily fabrication of cheap lies and innuendos.  The twin objectives of these mischievous campaigns were to hamper the normative ties of partnership that ought to have been cultivated between Eritrea and the Kingdom of Saudi Arabia and to create mistrust and tension between the two countries.  What are revealed in the “Wikleaks” documents, now in the public domain, represent in fact only the “tip of the iceberg”.

The TPLF regime and its mentors did not conceal their satisfaction when the bilateral ties between Eritrea and Saudi Arabia remained strained as a result of their incessant disinformation campaigns.  Indeed they flaunted this episode as a major “diplomatic” victory.  But lies and innuendos do not have long shelf lives and dissipate with time.  As it happened, truth has now prevailed.  The bilateral relationship between Eritrea and Saudi Arabia has today assumed the warmth and normalcy that it warrants.  Indeed, the visit of President Isaias to Saudi Arabia has opened a new chapter.

These positive trends appear to have entailed frustration bordering on insanity in the camp of the TPLF and its key sponsors.  The TPLF’s saber rattling has been a common staple throughout winter.   And this has been ratcheted up in the past few weeks.  The TPLF regime is resorting to tactics of covert intimidation to dissuade various circles from associating with Eritrea.  It has gone beyond these hints to openly assert that “it has secured a green-light from the United States to unleash war against Eritrea”.  The intensive diplomatic campaigns the TPLF’s sponsors have and continue to carry out, through various means, is also well-known.

We shall explain and address other related issues in due time.  For now, we say enough to attempts to foment chaos through disinformation!