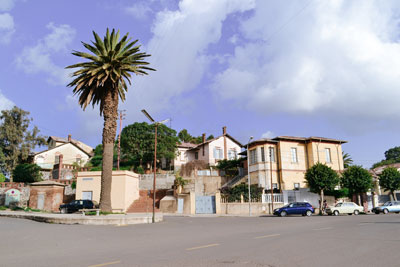 The pursuit of development and the necessity for urban renovation have become issues associated with the big cities of the late 19th and early 20th century. Generally, rapid urbanisation was behind the majority of the initiatives to renovate buildings and other urban infrastructures. On the other side, however, urban rehabilitation seems to have been attached to and influenced by urban aesthetic standards and the quality of architecture and the environment. Greater importance, however, was given to business necessities. The growing demands for buildings and space in the old city centre for services, businesses and apartments, and the conversion of residential buildings for other purposes are signs of the new development approach toward urban areas in many parts of the world. It also signifies the rapid urbanization and the main drive behind the tendency to renovate urban quarters instead of building new zones on the outskirts of the city.
Yet, urban renovation both as a concept and action seems to have been trapped between the need to continue and keep the history, culture, and architecture of the past centuries, encompassing all the memories that come with it, and the needs to make space for the fast expanding demands of the contemporary era.
The real face of urban life is not the jostling at the market, bustling boulevards, crowded traffic, or the smog that hangs over the urban sky. Rather it is the narrow and sometimes patched pedestrian roads, wide and jolted drive ways, well-crafted villas, beautiful public parks, and run down public buildings; in short, it is everything but the romantic image of a luxurious life that is usually associated with it.
Urban architecture in its totality is what makes up the imagination of people about urban life. Quite often than not, people asked about what they miss from their hometown will point out the main road that straddles the town, a public hall, the local cinema, school or church. Food and other soft aspects of city life usually came second to buildings and public spaces in memory.
The connection people have with structures is more easily understood than explained. The spirituality of buildings and structures to urban life is embodied in the history of the city and its inhabitants – so naturally that sometimes people are heard to talk about the image of a past that could not be recovered but could be remembered by keeping buildings and other urban structures well preserved.
Equally the things that are vividly recorded in collective memory happen to be the architecture, monuments, public spaces and markets. In some instances, as in the Paris of the late 19th century, erasing such memories and values were the main reason for the complete demolition of public quarters which were feared to be the symbols of defiance.
The city centre is usually the historical core of the city, often the oldest quarter and sometimes carrying highly valuable and important symbols and structures, and is naturally an attraction to tourists and visitors.

The desire to renovate, rehabilitate or demolish it and give space to new structures and needs is obviously in conflict with the need to preserve this uniqueness. In the mind of its inhabitants it is always “the first City” with its old centre and its heritage and all the bad and good memories it carries both for individuals and communities.

Asmara, as one such city built out of desire with design and passion, will naturally be ranked

among the first to be faced with such incongruent choices. The city’s exquisite villas, elegant art Deco buildings, and artistic sculptures are remnants of a history still remembered no matter with what kind of feeling they arouse. But they are some of the elements that magnify its elegance.

Due to successive colonial domination, control of these structures has passed through different hands as did the city itself. Under the possession of administrations that see such buildings simply as pieces of property to be used as deemed by their systemic needs, many of these structures were not given the necessary treatment they deserve.

Several monumental buildings were left in the hands of business people who never bothered to maintain or renovate them, as they saw only their commercial value and central location. Many more were distributed to individuals to serve as residential houses. In the absence of a defined ownership, institutional care was not easy to apply to these buildings. Consequently the service that they were giving was what mattered more, not the service they needed.

The new land policy that was declared by the Provisional Government of Eritrea after independence in 1994, however, has changed not only the status of these valuable heritages but also their prospect for the future. By placing land under the control of the state, the new policy has ensured that construction and other associated activities will be closely guarded. By extension, any infrastructural development in buildings and their renovation will come under a close scrutiny.

Evidently any renovation done to historic buildings either by individuals or organizations was closely supervised to ensure that the originality of the building was kept and respected. And in cases where renovation was not possible to be carried out by individuals, the government has stepped in and carried out renovation. Despite the need for new buildings and more space for service or offices, the Government has discouraged any demolition or displacement of old buildings in the town centre and the construction of new ones.

This of course should not signal that the government has blocked all renovation permits. As one can easily observe, individuals have been engaged in renovating widely throughout the city. The eagerness with which they responded to such endeavours is proof that people prefer renovation from new construction no matter what the reason may be.

However compared to those already rehabilitated, the number of the building units that need attention is huge. Such vexing situations sometimes might lead to the contemplation of demolishing entire blocks which might seem a much easier option than the painstaking work of rehabilitation. The truth however remains that no option that will destroy the history and memory of a city is good one.

The conflict between the pressure to change and the need to keep the historical essence of  the  “old part of the city” in continuity calls not for a choice between two options but for a third solution. The municipality need to devise new planning strategies: plans that would allow the city to preserve its uniqueness, a plan that emphasizes historically significant characters of the town and one that pays attention to the inevitable importance of sustainable development.

Protecting the historical appearance and fulfilling the municipal development objectives of the city can be reconcilable. By improving the façade of the pedestrian roads, boulevards, public squares, and residential and commercial areas, one can promote the development of tourism and recreation.

New construction provides additional units on new sites (either on newly demolished sites or on the newly acquired lands on the outskirts of the city), whereas renovation converts existing units into “new” ones but adds no additional units while preserving all the values and memories. The two initiatives should be viewed separately, as none can substitute the other in terms of their necessity.

From this angle, seeing them as separate instead of overlapping initiatives, building new units does not reduce the need to renovate. After all they both signal one thing – the hope and vivacious life behind their intention. It is people who see deep into their future, whether the near one or a distant one, that undertake such a costly adventure as building and renovating in the urban space.