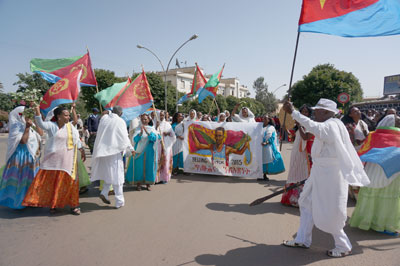 Early Wednesday morning, live from Asmara International Airport, here I am with the local press team, ready to welcome home the Eritrean athletes upon their return from the World Athletics Championships held in Beijing. The Eritrean team came back with the country’s first-ever gold medal in the men’s marathon, won by the precocious, young sensation, Ghirmay Ghebreselassie.
As I rush inside the airport to get their first impression, I’m positively surprised by their serenity and humility. Do they even realize the greatness of their achievements during the competition? Ghirmay Ghebreselassie, 19 years old, is accompanied by his comrades and does not seem to realize the weight of his victory. As an English TV commentator said, “So young but he shows such maturity and stamina; he has a great future ahead of him.” Indeed, Eritrean sportsmen and women are increasingly under the spotlight thanks to their great feats. Last month, they made history by having the “first Eritrean and African cyclists at the Tour de France,” and now they’ve given us both “the youngest marathon gold medal winner at the World Championship” and “the first time ever an Eritrean won a gold medal in World Championship.” Ghirmay, a simple and young man is at the same time confident and humble. During his interview right after his victory, he first mentioned his gratitude to the Eritrean people and, again, today he tells us that without the strong support of the people (or the whole team) he wouldn’t have been able to win. “I had a dream that I would one day wave the Eritrean flag and I still can’t believe that my dream has come true.”

Isaias Assefaw, their trainer, also mentions that “the people trusted us to represent Eritrea during this high level competition. The love, support and self-confidence were keys for the successful achievements of our athletes.” Additionally, as Amanuel Mesel (who ranked 9th in the men’s marathon) explains, Eritreans and friends of Eritrea were actively supporting the Eritrean team on various social media platforms, while Eritrean students in China as well as the Embassy played a helpful role throughout the duration of the competition. Within the team, two women represented Eritrea; one of them, Nebiat Habtemariam, 41 years old and a mother of two, began participating in international competitions in 1999. Since then, she has remained active and as she says, “age is just a number, if I have the health and capability why stop? There were younger runners than me who ranked behind me.’’ This woman truly astonishes me – physically tiny but so very strong.

Suddenly, the famous runner, Zeresenay Tadesse, who won Eritrea’s first ever silver medal for Eritrea in the 10,000 meters at the 2009 World Championship in Berlin, comes in and greets the athletes. As the latter rushed to welcome him, I just stood there and watched them smile and warmly receive their role model. Zeresenay humbly sat down with them and they were listening carefully. The mutual respect and camaraderie of Eritrean athletes was wonderful to witness, and bodes well for many more great achievements in the future.

Ambassador Zemede Tekle then welcomed the athletes before they embarked into the long line of cars to greet the people. Throngs are waiting patiently on the side of the roads which will traverse from the Airport, through Tiravolo, Godena Harnet (Independence Avenue) to the last destination, Bahti Meskerem. As per local tradition, Ghirmay and his team stand up in the car and wave to the crowd. Mothers wearing colorful dresses are guiding the crowd by singing and dancing, while people of all ages are enthusiastically waving Eritrean flags, and young boys and girls stand proudly holding posters of their new hero, Ghirmay. The marching band and a mobile stage of singers are opening the march and set the atmosphere for the streets of Asmara. Young sportsmen and women from the Sport Commission are lining up next to the cars of their role models, probably dreaming that one day it will be their turn. Workers from factories to offices and shops, students, children, elders, men and women in wheelchairs – everyone is present to see the athletes for just a couple of minutes. Fashionable groups of youngsters are happily recording every second of the unfolding celebrations on their Smartphones. The happiness and smiles on everyone’s faces cannot be denied and I am overwhelmed with how proud I am to be part of the crowd and witness this shared happiness.

The President of the State of Eritrea, Isaias Afewerki, at his office then meets the athletes while the crowd assembled in Bahti Meskerem waits patiently under the blazing sun. Government workers, Ministers, Ambassadors, and various members of international organizations are among the invitees. Ordinary citizens are also rushing to get a seat and be on time to take part in the official ceremony.

It’s 10.45 am. Let the show begin! Ambassador Zemede Tekle is making the opening speech and he highlights that the success of the athletes is partly the result of previous hard work by the Commission of Sport and Culture and also all other government bodies involved. He continues by stressing that the success of Eritrean sportsmen and women will continue, not only in athletics and cycling, but also in other types of sport.

The opening speech is followed by presentation of the athletics team to the audience, which greeted them with a standing ovation. Isaias Assefaw addresses the crowd by repeating “unqua kabzi hizbi teweledna,” meaning “thank God I was born from these people.” Locally, this popular expression is used to show one’s gratitude to belonging to the Eritrean people. The show continues with a series of cultural songs in different Eritrean languages especially produced for our athletes.

Undoubtedly, the power of sport to bring people together cannot be denied. Throughout history, many nations have utilized sporting events to promote culture and enhancing a sense of belonging and pride. The Olympics, for instance, from its early stages were a platform used for peace, the bringing together of countries under the banner of sport, and to showcase capabilities and cultures. Wearing the colors of the national flag or having supporters wave the flag and singing traditional national hymns or chants, are all aspects of the culture of sport. The culture of sport and the participation within international competition is a sign of developed culture (as Ambassador Zemede explained to me). Thus, for Eritrea to be represented in such competitions is sign of development and is a wonderful, effective mechanism for public diplomacy.

With international sporting competitions being a means of promoting public diplomacy, many political leaders around the world strive to ensure their nation is represented. As public diplomacy is a critical part of any country’s aims, it is important to highlight and invest in sport and culture. Tadesse Ghebru, Secretary of the Commission of Sport and Culture, has been in the Eritrean sports arena for the last 37 years, and was also part of the Beijing team. I asked him about including sport into educational curriculum in Eritrea, and he mentioned that though there is sports development at the grassroots level, it is still in its early stages.

Henceforth, in the coming years, it is essential to fully integrate the culture of sport into the educational program of children and youth. Indeed, most successful nations in sport competitions can largely attribute their successes to their large investments and widespread support in this sector during the early years of child development.

Sport is not only helpful for keeping a society healthy but it is also a strong “nation branding” tool (Sport Diplomacy, June 2013). It is not solely a question of public diplomacy but will also allow a nation to be renown, to have positive impact on tourism, and potentially, in attracting investors. To strengthen this, sport as a public diplomacy tool allows a country to overcome stereotypes and improve its international image (as written by Tatiana Zonova in The language of Sport is as universal as the Language of Music, 2014).

Sport has been a way of showcasing a nation’s ability and pride, and an effective tool of public diplomacy. The Eritrean Sport and Culture Commission is aware of its important role in strengthening and increasing the participation of Eritreans in international sport competition. Surely, the legacy of Daniel Teklehaimanot and Ghirmay Ghebreselassie is only the beginning of a long legacy of success.

“As in the theater, sport is a stage where life is played out vicariously. Its passions, dreams and prejudices are all laid bare under a canopy of objectivity. It offers a ready and cost-free opportunity for the projection of national traits and ambitions. No nation should ignore its possibilities” (USC Diplomacy 2014).