Blessed or Cursed? Resources and Development 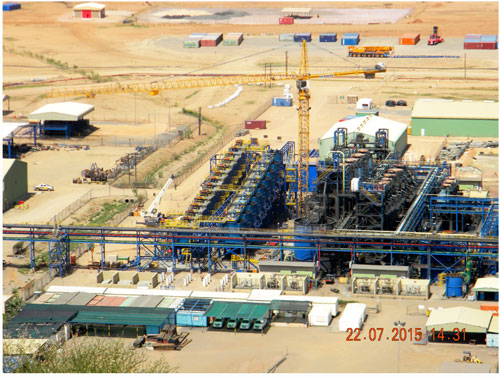 In recent years, Eritrea’s mining and energy sector has received considerable attention. The country has been described as “…likely sitting on massive oil and gas reserves…” and possessing all “… the geological features of a major hydrocarbon bonanza..,” while its nascent mining industry has been touted as a potential regional and global powerhouse.

At the same time, however, the majority of mainstream discussion about Eritrea’s mining and energy sector, much like coverage of the country in general, has been plagued with inaccuracies and lacked context, with many observers simply characterizing the country as just the latest in a long line of resource-abundant or dependent developing states doomed to be a failure. Not only are such observations cursory and quite misplaced, they largely overlook the specific role of natural resources within Eritrea’s broader developmental framework. Accordingly, this piece provides an initial, and hopefully  enlightening, glance at Eritrea’s  approach to both development and resources.

Without question, Africa is the world’s poorest continent, and African nations have consistently ranked lowest in the world on an array of socio-economic or development measures. These failures can be attributed to a wide-range of factors, including historical influences, socio-political dynamics, ethno linguistic or religious based divisions and rivalries, weak governance and corruption, deficient infrastructure, poor macroeconomic management, and debilitating external meddling.

Over the decades, the international development community, economists, and other observers and analysts have offered a plethora of possible solutions, with many ending up as abject failures. Frequently, natural resources have been viewed as a proverbial magic pill, yet, if managed appropriately within a well planned and effectively implemented programme, resources may help establish a strong platform for sustainable development.

Dating back to its initial days of independence, Eritrea, located in the fractious Horn of Africa (HoA) region, has been raptly aware of the need for a holistic, multifaceted approach towards development, while being alert to the pitfalls of the resource curse. The stagnation, if not outright regression, in  development of many countries with great natural endowments has served as a clear, sobering lesson for any developing nation with resources (consider Mobutu Sese Seko in the former Zaire or the unfortunate outcomes of the oil industry in Nigeria, particularly the Niger Delta). Quite early on, Eritrea outlined that its ambitious development programme would focus on: the rehabilitation and construction of infrastructure; raising agricultural productivity; promoting private investment and exports; investing in education, health and nutrition; protecting the environment; and mobilizing communities for development.

With regard to its considerable resources, Eritrea’s approach has been cautious, pragmatic, and one where the nation’s resources represent only one component within a larger, more complex equation towards holistic development, rather than a simple panacea. The country’s former Ambassador to the  United Nations (UN) and current representative at the African Union (AU), Araya Desta, specified aspects of the Eritrean approach, which largely champion sustainability, equality, and environmental friendliness, in a statement to the UN Security Council’s Thematic Open Debate on Conflict Prevention and Natural Resources on June 19, 2013. Desta noted that “[t]he cardinal principle of Eritrea’s mining policy [is that]…all mineral resources are a public property, and that the conservation and development of these resources must be ensured for Eritrea’s present and future generations.” Furthermore, Eritrea’s National Development Strategy (2012) spells out that Eritrea “…is aware that [its resources] are non-renewable…and they have the potential of being curses rather than blessings for societies. Focus on the mining sector often leads to ignoring more vital and sustainable sectors.” Last, the Director General of the Department of Mines in the Eritrean Ministry of Energy  and Mines, Alem Kibreab, has underscored that “…the mining sector must be developed slowly and carefully to prevent…the resources curse.”

While Eritrea’s policies and statements toward both development and resources have been articulated and suggest pragmatism, projections about the future utilization of resources require consideration of Eritrea’s developmental record. Amongst the most tangible outcomes of the country’s developmental efforts are its successes within health and education, especially in regards to the United Nations Millennium Development Goals (UN MDGs).

Frequently dismissed, overlooked, or unacknowledged internationally, Eritrea has recorded positive outcomes on most of the UN MDGs. Tremendous successes have been recorded including: HIV/AIDS and TB control and reduction; drastic malaria decline (described as the

biggest breakthrough in malaria mortality prevention in history); massive decreases in maternal and child mortality (the latter was partly the result of a 99% immunization coverage rate that has been internationally recognized); significant improvements in gender equality; tangible expansions and promotion of education; and steady progress within environmental sustainability.

While challenges undoubtedly remain in several areas, Eritrea’s continued national developmental efforts have also witnessed “… access to clean drinking water in rural and urban communities in Eritrea improve to a total of 85%,” progress in developing the fishing sector, and a growing focus on agricultural production to support food security.

The majority of these outcomes are the fruit of cost-effective national development initiatives, unique rural village and community projects (often locally led), and the Warsai Yikealo development campaign. Sharing parallels with Singapore’s Works Brigade, which recruited young unemployed people, housingthem and employing them within agriculture, farming and various construction or infrastructure projects, the Warsai Yikealo campaign involves the participation of the National Defence Force in various development projects, such as irrigation and the construction of micro-dams and wells, and the concept has received interest and promotion from notable international scholars.

It is within this broader, comprehensive, multidimensional developmental framework that Eritrea’s natural resources may prove useful; not only to accrue foreign capital and strengthen the economy, but also to promote continued overall development. Despite infrastructural destruction and heavy costs due to the war with Ethiopia, which  continues to flout international law  and illegally occupy sovereign Eritrean territory, Eritrea’s economy has grown in recent years. With an appropriate utilization of resources within the larger national development strategy, Eritrea’s mining sector will play a beneficial role moving forward (e.g. through helping to fund infrastructure projects or investments in other areas).

While examples of the dangers of the resource curse and mismanagement are readily found across the developing world, Eritrea’s leadership has long reiterated that its resources will be utilized for the benefit of current and future generations.

In addition, Eritrea will remain committed to providing a comprehensive “…environment for growth…” based on enhancing human capital and infrastructure, with the ultimate aim of improving the quality of life for the people.” In regard to fears of resource mismanagement, the African Development Bank Group (AfDB) has previously noted Eritrea’s “…relatively low levels of corruption,” while former United States (US) Congressman and law professor, Tom Campbell, has described Eritrea’s “…reputation for honesty and low levels of corruption” as being one reason (among others) to believe in the country’s investment potential. Finally, the

Overall, Eritrea has witnessed several tangible developmental outcomes, especially within the socioeconomic, health, and educational sectors, with the country’s natural resources both playing a positive role in and holding the potential to further augment these outcomes.  At the same time, Eritrea faces a range of considerable challenges. Water and sanitation, food security, and poverty are immediate areas of attention, while the prolonged illegal occupation of Eritrean land by Ethiopia represents an unnecessary and harmful distraction from broader development goals.

Moving forward, it will also be vital for Eritrea to diversify, adding to or moving away from potentially unstable primary products. Manufacturing is essential to sustained growth and development, and with rapid technical change and globalization, it is an increasingly important means of modernizing and  diversifying the economic base. In this regard, Eritrea’s focus on and growing investments within education and human capital are critical as they can help hone the skills and capabilities required to compete and thrive within fierce global  markets.

Last, the international community should remain constructively involved in and supportive of Eritrea’s developmental efforts, promote the respect of the country’s sovereignty and territorial integrity, and generally support peace, cooperation, and stability in the region.