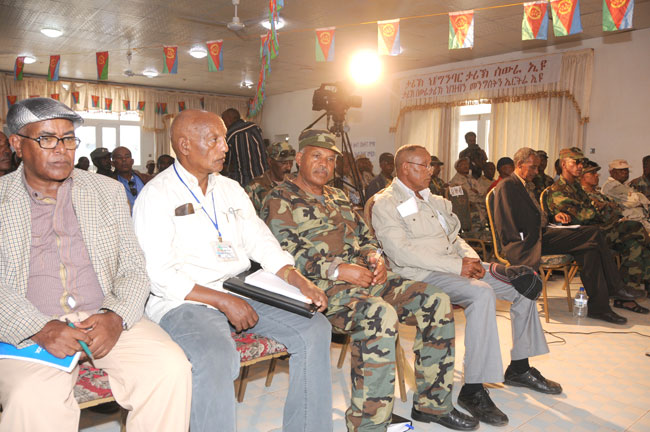 The history of the Eritrean struggle for independence is surrounded with full of heroic feats by individual liberation fighters in different capacities from the leadership to the rank and file of its members. Each liberation fighter has his/her own history to tell and remember and with proper documentation that would enable generations and historians, with special interest about the Eritrean struggle for independence, have the full picture of what the Eritrean people have to go through to gain their independence and put their country in its right place in the annals of history.

To further enrich the history of the armed struggle for independence more initiatives are being taken by different units of the EPLF. The activity is being conducted in the form of organizing workshops by specific groups and units involved in similar activities. The aim of the workshops is to collect information from individual members of the group and finally document and analyze the information gathered and ultimately come up with the history of that unit and incorporate it with the collective history of the armed struggle for independence.

One way of collecting information from individuals could be through conducting interviews to the individual members of a unit. But that is time consuming and unlikely to get the desired information. Hence, the workshops have comparative advantages of their own. It is because groups remember more than the individuals, as groups are able to draw on the knowledge and experience of all individuals present. Moreover, information exchange among members often helps individuals to remember things that they would not have remembered had they been working alone.

The Mining Unit of the EPLF conducted a three day workshop from August 04 to 06 in the city of Keren aimed at documenting the heroic feats undertaken by the individual members of the unit during the armed struggle. Each member has been fluently narrating its daily activities executing its assigned operation. The narration incorporates the time, date month and the year of operation. No deviation and if there is it is automatically corrected by the others. The Mining Unit that was established in 1970 with a small section grew through time and the intensity of the struggle to the highest level. The workshop has been divided in stages and everyone participant has a lot to narrate his/her involvement and results achieved or failed.

The mission of the unit has been to assist the combatants fulfill their assignment through clearing and defusing enemy explosives and create gateway for them so that they execute their mission unhindered by those explosives. The other objective of the mission has been to plant anti human and vehicle mines and abort or slow the enemy advances. In addition to that the Mining Unit has been also involved in combat missions behind the enemy lines destroying enemy infrastructure and other enemy economic interests. With regards to that the unit has conducted a massive job and it has been one of the vital organs of the EPLF units.

Starting from mid-70s the unit established a workshop and research and study center in which it started to develop different devices that helped it strengthen its performance capacity.

The mission of the Mining Unit has not been confined to Eritrea proper but it has also been operating beyond the border, mostly in Tigray and Assosa, Southern Ethiopia. The objective of the missions beyond the border has been to weaken the enemy where ever they are and ease the burden of the liberation fighters inside the country. They have been doing the operation in places they have never been before, the terrain they have never been used to and the people they never know. But they were executing their mission meticulously and at that time they gained the appreciation of the people they were there to stand alongside them.

The logo of the unit, it is in every mind of the members from early stage of their assignment to the unit, “The First Mistake is the Last”. One mistake in planting or defusing a land mine could cost life not only on the individual but also to the entire unit involved in the operation. The logo as it tells “do your job properly or else it is the end of your life” is frightening and that needs courage and determination. Courage and determination have been the trademark of the EPLF combatants, otherwise no human being would dare to do that knowing sooner or later with a minor mistake could end his/her life.

Most of the participants of the workshop were liberation fighter at their 50s and 60s of age. Their memory is still intact and they recite every movement, place of operation and the achieved or failed result. They remember every detail because they have been living in it and they have been doing it for a cause and as such the memory has become part and parcel of their entire life.

The initiative to organize such workshops is recommended and it is a noble effort. The Eritrean struggle for independence is unique by all standards of measurement. The Eritrean people fought for their independence against a powerful colonial army of sub-Sahara Africa backed by some world’s super-powers. The enemy has been equipped to the teeth with modern weaponry that it was supplied by the super-powers. Moreover, especially during the successive offensives by the enemy to capture the EPLF stronghold at Nakfa, there were Soviet military advisors involved in direct combat. The modern weaponry coupled with the foreign modern military advice could not deter the liberation fighters from pursuing their desire goal, no matter what, whatever the cost Eritrea should have its right place in the world map. Eritrea in which its people live proudly as free people walking in their country with their heads high in confidence.

The workshops being conducted by the different units of the EPLF aimed at documenting the heroic feats during the armed struggle for independence are very commendable and that will enable the Eritrean generations to come know about the heroism of their fathers and mothers, how Eritrea was born into a nation, the challenges and hardships encountered and that Eritrea has come with a heavy price. The heavy price paid did not end in vain and its sovereignty should be preserved at any cost. Properly documenting the heroic history of the struggle for independence and the struggle to safeguard its sovereignty would enable the Eritrean generations develop their understanding and develop determination to build a developed country in which its people live in prosperity and harmony.

Blessed or Cursed? Resources and Development